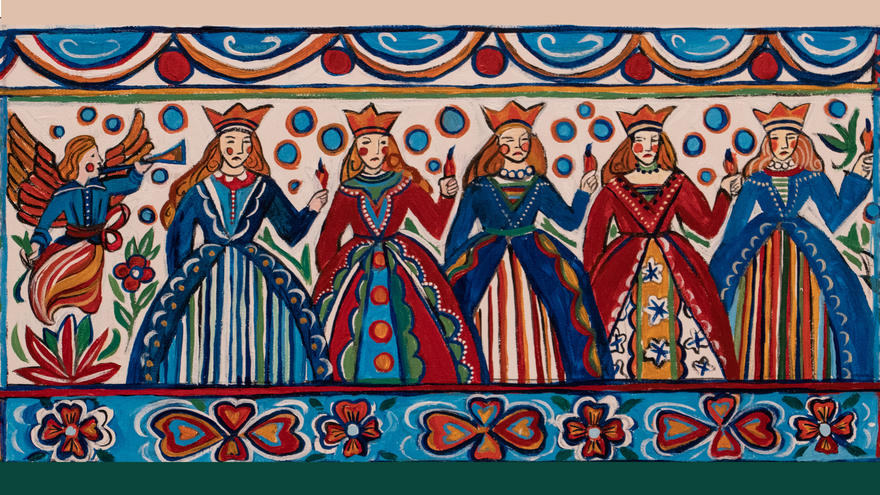 Her paintings, with their bold color and life, speak to people from across the planet, stirring the ancient memories of the Swedish countryside, the Sami lands of the Arctic, and the woodlands of northern Minnesota.

Alison Aune from UMD's School of Fine Arts received the 2020 ARAC George Morrison Artist Award. The George Morrison award was created by the Arrowhead Regional Arts Council for a long-term commitment to the arts. 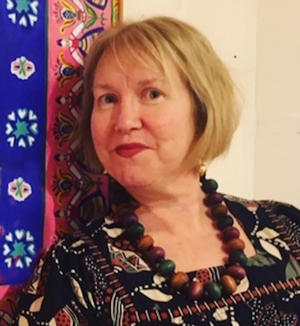 Alison Aune is a painter and professor of art education at the University of Minnesota Duluth. Her mixed media paintings are inspired by Scandinavian and indigenous Sami patterns and motifs. She draws on a feminist aesthetic, exploring the intersection of art, craft, and heritage. Through the process of inquiry, critical reflection, and the direct referencing of these symbolic patterns into her paintings, she is discovering the original meanings and the cultural significance of these ancestral designs. In this way, she is not only exploring her heritage but is keeping the imagery alive by re-contextualizing traditional folk art forms into a contemporary context.

In her floral icon and portrait paintings she uses Siljan’s rye crisp bread wrappers as the universal form to symbolize harmony and balance. The decorative patterns within and surrounding the portraits and flowers are inspired from women’s traditional material culture: textile patterns such as dukagång, 18th Century rölakan weavings from Skåne, Dalarna kattun, folkdräkter and bunader (folk dresses from Sweden and Norway), traditional Sámi Gákti , Norwegian sweater motifs, various embroideries, and Nordic sølje (silver) are all designs infused with ancient symbolic meaning for protection, fertility, and healing.


Alison's art has touched thousands of people in galleries, classrooms, and conversations, not just in Minnesota, but around the world. She has exhibited her paintings in solo and group exhibitions, often offering lectures and classes as accompaniment. See Alison Aune Images: Video

The places her work has been shown include the University of Lapland, in Rovaneimi, Finland and the Kunstiskool in Happsalu, Estonia, and three exhibitions in Sweden: Sahlströmsgården in Torsby, Samlargrafik in Fjälkinge, and Växjö Stadsbibliotek in Växjö. Her work has been exhibited at many places in the U.S. including MacRostie Art Center in Grand Rapids, Minnesota, the American Swedish Institute and Norway House in Minneapolis, the Swedish American Museum in Chicago, the Vesterheim Norwegian Museum in Decorah, Iowa, the Scandinavian Center at Pacific Lutheran University in Tacoma Washington, Central Gallery at the University of Massachusetts in Amherst, Massachusetts, and Suomi College in Hancock, Michigan. Alison’s paintings evoke a feeling of shared emotion and an element of truth that resonates with the viewer.

The George Morrison Artist Award is named after internationally acclaimed visual artist George Morrison (1919-2000), who was an important member of the second generation of American abstract expressionist artists. Morrison was heralded for successfully synthesizing American Indian themes with abstraction and surrealism. A life-long member of the Grand Portage Chippewa, he resided and worked for many years in the Arrowhead Region of Minnesota. His work has been shown in museums around the world and was recently the subject of a special show at the Minneapolis Institute of Art.

About ARAC 2020 award to Terresa and Jordon Moses