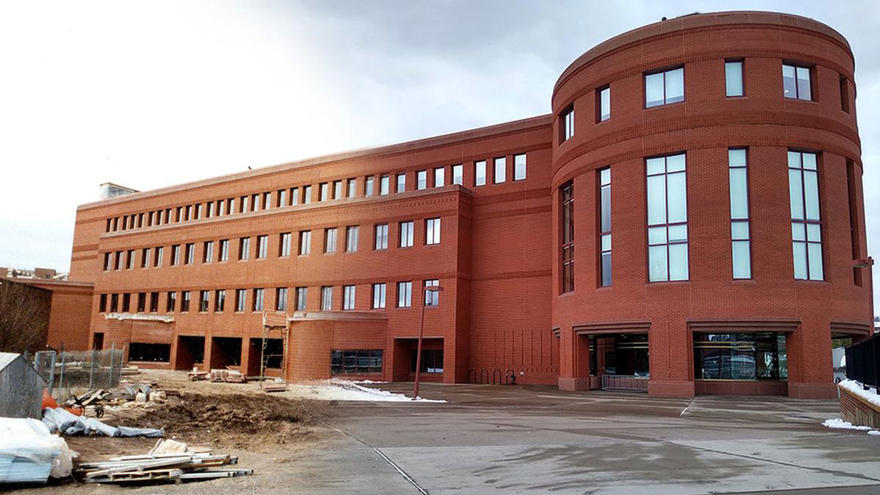 This fall, the Kathryn A. Martin Library turns 20!

In celebration of the Library’s birthday, and in honor of the Campus’ 125th Celebration, we asked people to share their stories about this important chapter in UMD’s history.

Designing for the Future

UMD’s Library was formerly housed in the center of campus where the food court currently resides. Mags David, who was hired with the library just before construction began, recalls the old space: “The main entrance and circulation desk were right where the back entrance to the Food Court is.” The circulation desk was, at the time, where Center Court Restaurant is now. “What is now the Food Court area had study areas, newspapers, some computers. The windows opened, but we didn't have air conditioning and the building was very hot in the summer with the sun beating in on those windows,” said David. 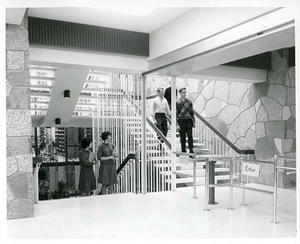 Library patrons pictured on the staircase in the old UMD Library (1969?)

Back then the Library was unfit to meet the needs of a changing world. It was also a health and safety hazard by today’s standards. Liz Benson Johnson, who has been with the library for 36 years, said that she recalls touring the old library building with a group of University leaders to show the problems with the building. Johnson, who would later coordinate the move into the new building, stressed to the group “that it was important for the University to provide a safe environment for our users and the staff who work in the building.”

Jim Vileta, liaison librarian to Labovitz School of Business and Economics, notes that he spent 22 years of his career in the old library space and it was simply “worn out” and was beyond any further use. He noted that it had been built “piecemeal over time with little focus on appearance or functionality.” It was clear that a new space was desperately needed.

Former UMD Chancellor Kathryn A. Martin shared that when she was interviewing for her position as chancellor, she knew then that a new library for UMD would be one of her top priorities. Libraries, she said, “are a testament to our past and our future.”  Chancellor Martin had a vision for UMD’s campus which included adding “exciting” buildings at each end of campus, and what better way to welcome people to an institution of learning than to enter through a library. In a Duluth News Tribune article about the new library, it was noted the project cost $25.8 million.

Chancellor Martin, then Library Director Bill Sozansky, and Martin's team garnered support and the funds to build the new library, and she noted: “the legislative support for the project was so outstanding.” It was enough to bring to reality her vision of a space that would meet the needs of current students - “more than just a box of bricks” - and it had to be a space that was flexible enough to accommodate future needs.

(From Left to Right) Construction on the Library structure, 1999; A worker lays exterior bricks, 1999; The Library's copper dome, 1999

A Place for All

Stanius Johnson Architects based in Duluth, Minn., was responsible for the design of the library and project oversight.  Staff at the time were given the opportunity to provide feedback on the design of the building. Anne Hovde, who has been with the library since 1984, recalled that staff was able to “participate in the design by giving feedback about what type of office space suited our work the best, which was really appreciated.  She recalls that groups who toured the library post-construction were quite envious of this new state of the art space, and said that it just made everyone feel like a really good thing had been accomplished.

Liz Benson Johnson said, “it felt rich with its terrazzo floors, brass railings, marble counters, Chihuly chandelier, and the maple paneling everywhere.  It was the nicest building on campus.”

While professional movers were brought in to assist with moving the collections and shelving, employees and student workers helped in the process. Mags David recalled that “a lot of staff helped to move the periodicals onto the third floor, where the Gov Docs and Children's collections are now. We'd load them up, take them down the elevator in the Library Annex, then in through the back door and up the service elevator.” 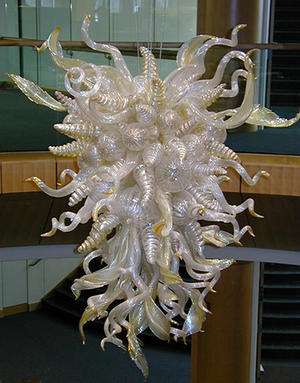 Gail Trygstad who joined the Library’s staff in 1999 was hired as the fourth member of the Computer Work Team. She recalls that one of her “primary duties was to help make sure the library's computers were all Y2K compliant and ready!”

The new library was about more than just books, it was about technology and about creating a space for students to be students. It was open to opportunity.

One of the most notable features inside the Library is the Chihuly glass sculpture suspended between the first and second floors. The sculpture is an original by artist Dale Chihuly. Chancellor Martin recalled traveling to the gallery in Arizona to pick out the sculpture, which was then transported in pieces and had to be professionally assembled. Liz Benson Johnson remembered that “the installers would thread a long piece of wire through a hole at the top of a piece of glass and spin the piece to twirl and secure the wire. Then they attached the glass pieces to the center post, and they twirled the pieces again. There was the sound of glass bumping against glass.”

Jim Vileta said that “after all these years in the new library, our library still looks very new to me.  This has been a magical era for me, as I spent 22 years in the old building... so the contrast is great.”

The building has evolved, as intended, since opening in 2000. It was named after its champion, Chancellor Martin, in 2013, the same year the learning commons opened. Staff offices and storage space became the Math Lab in 2014 and expanded in 2016 thanks to the naming gift from Securian. This past summer the library underwent yet another minor transformation with the Media Hub’s move to the first floor and a refreshed classroom created in its former location on the second floor.

The spaces continue to do what they were designed for: transform to meet the needs of the users.