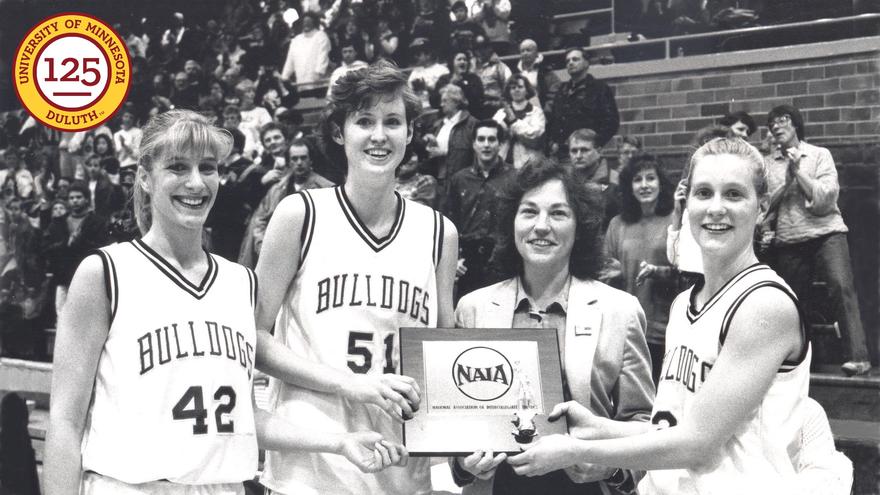 Linda Larson was born in San Francisco, California, and raised in Chicago, Illinois alongside her twin brother, Don. 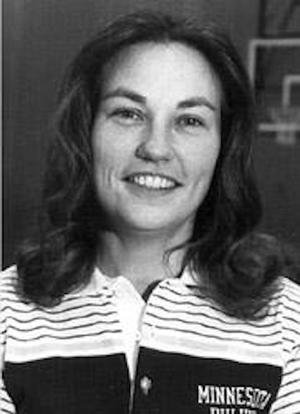 Growing up, Larson was always perplexed about why her brother got to join in team sports, but she had to sit in the stands. “I wasn't allowed to participate in sports but he could," Larson said.

Although a gifted student, Larson was always drawn to athletics. In high school, she was encouraged by teachers to pursue a more academic career path. She said that one of her mathematics instructors even wrote in her yearbook, “Why P.E.?” For Larson, the answer to this question was simple: “Because I wasn’t allowed to do it. It was a challenge.”

Larson studied physical education and administration and received a B.A. from Northeastern Illinois University in Chicago in 1971 and an M.A. from Ball State University in Muncie, Indiana, in 1972. She taught physical education classes as a graduate assistant while at Ball State. In September, 1972, she was hired at Culver Military Academy in Culver, Indiana, in the new position, as girls athletic director and also coached volleyball, basketball, softball and track and field.

A Career in Athletics

Larson came to Duluth and UMD in 1975. She said she “lucked into” the women’s athletic coordinator position.

Larson remembers talking to Joann “Doc Jo” Johnson, a professor in the physical education academic program, who served in an ex-officio capacity on many athletic department committees. Johnson didn’t tell Larson she had been hired at first. Larson remembers being introduced by Johnson to Ralph Romano, the athletic director and Bruce McLeod, the assistant athletic director, as they ate lunch is Romano’s office. Johnson said, ‘This is your new women’s coordinator.’”

When Larson started at UMD, there were no paid coaches for women. Professor Bob Powless from the American Indian Studies program was coaching basketball for free and a graduate student was in charge of volleyball. The rest of the teams were coached by members of the UMD physical education faculty, Johnson (field hockey), Eleanor Rynda (women’s and men’s cross country, women’s and men’s indoor and outdoor track and field), and Mary Mullen (swimming and tennis.

Larson was hired as the women’s athletic coordinator, but also saw the need for additional coaches. With no additional money available to hire coaches, Larson added coaching volleyball, basketball and softball to her work load. Again, the existing model of women coaches volunteering to coach continued. Larson, like Johnson, Rynda and Mullen, wanted to provide athletic opportunities for women at UMD, so they continued to volunteer their time and expertise to make it happen.

These four women sought to uphold Title lX which is a clause of the 1972 Federal Education Amendments. Title lX was signed into law in 1972. It's 37 words state that “no person in the United States shall, on the basis of sex, be excluded from participation in, be denied the benefits of, or be subjected to discrimination under any education program or activity receiving Federal financial assistance.”

The women faced an uphill battle. Not only were there no paid coaches, but women’s athletics was hardly recognized. Larson said that when she arrived, UMD was in the process of moving Women’s Athletics into the Athletic Department, which was Men’s Athletics only. The larger gymnasium had “Men” written over the entry, while the smaller one had “Women.” She met resistance to “having women involved in what was always the men’s area,” Larson said.

The funding for women’s athletics was miniscule compared to the men’s program. “Everything [in] the athletic budget… went to the men,” Larson said. “Everything” meant all of the scholarships. That allocation was in direct violation of Title IX. Larson brought up some report discrepancies to Bruce McLeod, the athletic director at the time. She had received a copy of a document from the University of Minnesota Twin Cities that listed scholarship money that women at UMD received.

“Who’s getting these scholarships?” she asked Bruce. “Women don’t have any scholarship money.”

McLeod’s only response was, “Well, I guess we better be careful that we do our reports right.” No efforts were made to rectify the situation.

“I was just trying to find out information, a lot of times,” Larson said. 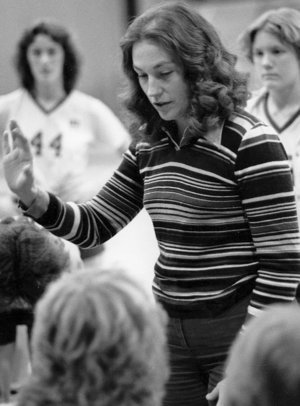 “I think the concern was [that] I was rocking the boat.” Larson faced massive opposition to full Title lX compliance. However, her strategy didn’t involve overt struggles. Instead she issued written reports and pointed out imbalances. At this time, there was strong opposition to Title lX from men’s athletic programs at colleges and universities across the country. In 1988 the Civil Rights Restoration Act stated that Title lX applied to all programs and activities of any educational institution receiving Federal financial assistance. Failure of educational institutions to comply with Title lX legislation led to various lawsuits.

Larson’s instincts were right, but it took 24 years after Title lX was adopted for the full story of inequities to be exposed. In 1996, some of the UMD women soccer players filed a Title lX lawsuit against UMD. It wasn’t just women’s athletics that suffered, it was the integrity of the program. As the March 1997 issue of

Women in Higher Education reported, “At the University of Minnesota-Duluth, trouble in the athletic department kept growing.” In August of 1996, “Bruce McLeod resigned amid charges of theft and diverting funds earmarked for gender equity to other accounts.”

The challenges Larson faced did not keep her from doing her job or speaking her mind. Throughout her career she championed women athletes. She worked to expand women’s athletic programming on campus, which was integral to the university’s compliance with Title IX.

Making a Difference in Campus Life

Larson did extensive work for women. On campus, she worked diligently to improve the position of the Women’s Resource and Action Center and served on the Commission on Women. Off campus she volunteered her time and served on the boards for the Northern Pine Girl Scout Council and the Duluth YWCA.

In 1999, Bob Corran, UMD’s then new athletic director, nominated Larson for the President’s Award for Outstanding Service to the University of Minnesota system. She was awarded this honor.

UMD also created a special annual award in Larson’s name. It honors women at UMD who exemplify going above and beyond to benefit women at UMD. She was bestowed with the first Linda M. Larson Outstanding Woman of the Year Award in 2002. The recognition is still presented every year to women faculty, staff and students, and Larson often comes to campus to present the awards to the recipients herself.

UMD has given praise to Larson many times in the past and the 125th Anniversary of UMD offers one more opportunity to remember her contributions to equity in athletics.

Banner photo above: Linda Larson along with (l-r) Kelley Tralle, Julie Coughlin, and Amy Erickson celebrate advancing to the NAIA national tournament in 1993. Documents, oral histories, and photographs for this article were provided by the Archives and Special Collections, Kathryn A. Martin Library, University of Minnesota Duluth. Additional photos were provided by the UMD Department of Intercollegiate Athletics.

This story was written by UMD student Izabel Johnson who is majoring in journalism and minoring in communication. Izabel works with Cheryl Reitan in University Marketing and Public Relations.