Swedes at the Tweed 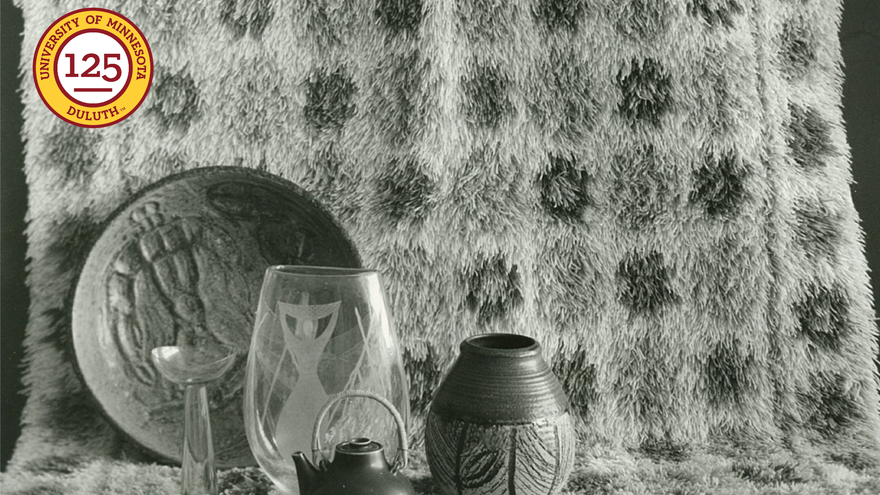 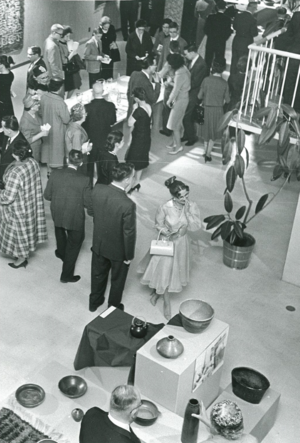 On a brisk April day in 1961, the Tweed Art Gallery formally opened a display of Swedish art, which included a “194-piece exhibit of Swedish glass, crystal, woven products and ceramics.” The huge crowd of more than 1,000 people who joined the celebration was a testament to the popularity of Scandinavian design at the time and a reflection of the large population of people of Scandinavian decent in Minnesota.

The exhibit was put together by the Tweed's Associate Director Orazio Fumagalli, first secretary of the Swedish embassy in Washington, Gunnar N. Lonaeus, and Swedish Consul General in Minneapolis, Gösta af Petersens.

Collections and pieces were borrowed for the exhibition from the Gustavsberg factory, the Rörstrand factory, and other Swedish firms. The exhibit was designed by Fumagalli, a renowned sculptor, who went on to have a long career as an artist and professor. 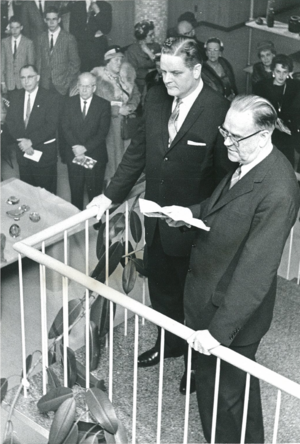 To honor the exhibit's grand opening, Swedish Prime Minister Tage Erlander, his wife, Aina Anderson Erlander, and the Swedish Ambassador to the U.S., Gunnar Jarring, paid a special visit to Duluth after meeting with President Kennedy in Washington, D.C. Their stop in Duluth marked the beginning of a quick tour around America.

Prime Minister Erlander was delighted by his visit to Duluth and found many touches of home among its hills. He said, "You have the forests and the inland lakes and rivers around you. You have iron ore. And you have a large body of water comparable to the Baltic Sea." Provost Raymond W. Darland and Prime Minister Erlander opened the exhibit. Erlander commented, "It is a great personal satisfaction to me to be present when Sweden is presenting an art exhibit in a city such as Duluth." He called Duluth, "a city with an open mind and a keen appreciation of art."

One notable designer for some of the pieces was Wilhelm Kage of the Gustavsberg factory, which is situated on the island of Värmdö in Sweden's Stockholm archipelago. Kage was well known for being one of the first pioneers of 'Swedish Modern.' "His heavy, powerful forms and deep glowing glazes are unmistakably typical of this grand old man among the Swedish ceramicists," Lonaeus wrote when he described the crafts of Sweden. Another memorable collection was the one-of-a-kind stoneware pieces by Carl-Harry Stålhane, who was chief of design at the Rörstrand factory, which at the time, was located on Kungsholmen Island in Stockholm. Stig Lindberg, the artistic leader the Gustavsberg factory, and many others, had their pieces displayed at the Tweed. 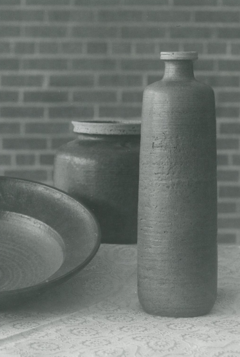 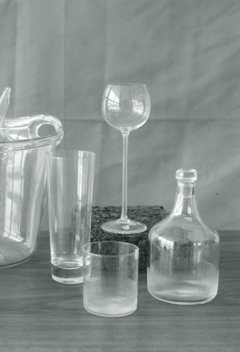 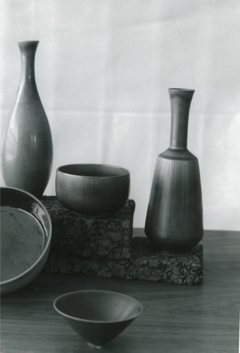 The pieces to the left reflect the Scandinavian design movement, characterized by simplicity, minimalism, and functionality that flourished in the 1950s. Work by Wilhelm Kage of the Gustavsberg factory is at the far left, a collection of mid-century Swedish art glass is in the center, and on the right is work by Stig Lindberg of the Gustavsberg factory. These pieces reflect another influential design show named Design in Scandinavia, which traveled to 24 museums throughout the U.S. and Canada from 1954-57.

Lonaeus described the Tweed exhibition with these words, "Due to Sweden's comparatively late industrialization, the folk art tradition, with its emphasis on the functional simplicity and gay decorative pattern, prevailed longer in Sweden than in many other countries, and was given a new lease on life through the craft movement."

The exhibit was welcomed by a huge crowd at the opening and even more visitors throughout its stay at the Tweed.

The photos and quoted sections of this story are from the collection of the Tweed Museum of Art. Special thanks to Karissa White Isaacs, associate curator, for helping find the original photos and documents.