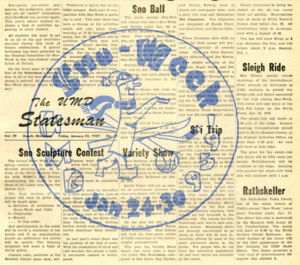 Sno Week was a week-long celebration at UMD, from its inception in 1950 until the last Sno Week dance in 1972. Every year brought a different set of events. Over the two-plus decades, UMD presented nearly every winter activity under the sun, and most of the celebrations ended with a large, semi-formal dance called Sno Ball.

Some years students went dashing through the snow… literally.  They called the series of athletic activities a Sno Trek and one of the events was a 50-yard-dash through deep snow. According to the Statesman, in addition to the race, the 1953 Sno Trek included “cross country skiing, speed skating, snow shoeing, and a sleigh pull across the broomball rink.” 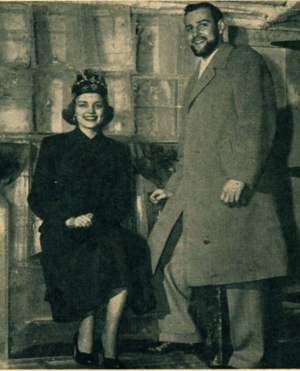 Every Sno Queen had her king. For many years, the Sno King was decided by the best beard. In

1954, the contest description read, "The chin foliage, which is requested to be cultivated by all male students on campus, started its growth on the first of February.” That same year, the King was decided after the square dance and the winner was given a $10 prize and the honor of crowning the Sno Queen. According to the Statesman, "It took four judges to choose the longest and fullest beard grown by the male member of UMD."

Students loved a Ski Trip. In 1954, UMD students went to Lutsen Ski resort to kick off Sno Week. For many years, the ski trip started with a ride on a Greyhound bus, nicknamed the "sno-caravan," picking students up and heading up to Lutsen. The midnight bus ride home became commonly known as the “dawn yawn.” In 1957, they went to Sawtooth Mountain in Grand Marais and in 1958, the ski trip was held at Mount Telemark in Cable, Wisconsin.

For one year, in 1958, Sno Week changed its name to Schneefest, (schnee meaning snow in German), and that change garnered the attention of the German populations in both Minnesota and Wisconsin. The events included, "a sleigh ride, ski trip, polka dance, sled dog races, and a snow sculpture.” The week was described as full of  “fun, frolic and pulchritude” (which means desirability). The ’58 ski trip cost only $8.50, around $75 today. Students received “transportation to and from Cable, two meals while there, and [their] tow fees for the day.”

Schneefest drew national attention in 1958. Fox-Moveitone heard about UMD’s annual event and arranged to come to Duluth in early March to film UMD students. Tom McMorrow, a sports anchor for Fox-Movietone at the time, visited campus and was charmed by the “birches and pines” on the lower campus. McMorrow, who called the feature, “Winter fun on the American campus,” asked for all available UMD students to be part of the filming, which included a sled dog race, a broomball game, skating, and ski-jouring.

The Snow Sculpture contests that took place in front of Kirby Student Center were quite popular and drew many students out into the deep freeze every year. Sculpting was done one day and judging was done the next, allowing the snow to freeze overnight. Some of the more elaborate sculptures included a large snow train, a snow sphinx, and a perfect snow pyramid.

The final UMD Sno Week activity was held in the Bullpub (now the Rafters) in 1972. The  eight-piece show band was named Package, and it was accompanied by two “go-go” girls.

The photos and quotes in this story are from the Archives and Special Collections, Kathryn A. Martin Library, University of Minnesota Duluth. Banner photo: In 1958, this group of organizers changed the name to Schneefest and featured an event called Rathskeller Night.