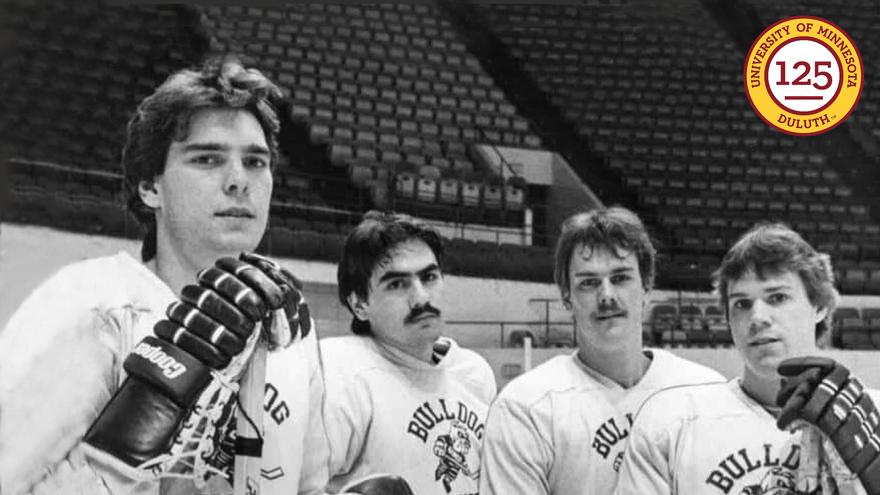 An alumna mixes a degree in office administration with a zest for life.

Sherri LeKang laughs when she tells the story of Bulldog Hockey and the 1984 Frozen Four. “The Bulldogs had beaten the Gophers, that was the gold standard,” she says. The campus was buzzing because UMD was on its way to Lake Placid, New York, for the playoffs. Sherri was not about to be left behind.

She was in her junior year at UMD and forces had come together to create a certain vibe. Winters were long, and snowfalls set records. “We would stand in line for hours in Kirby to get student season tickets to the hockey games at Pioneer Hall.”  Weekend evenings started with finding a ride to the game and relaxing afterward at Grandma’s Saloon or the Warehouse in Canal Park. Sherri also was friends with Tom Herzig, the hockey player from International Falls.

Sherri and her husband, Kirk Myhra '85

Sherri and Sue Brannon, her college roommate, didn’t think twice about the trip to New York. They rode the student bus, a rented motor coach. “We got on the bus early in the morning and arrived the next day.”  They drove through a blizzard in Upstate New York, but as one sports reporter said, it didn’t matter because, “the Duluth fans were delirious.”

During the opening games, Duluth beat its rival North Dakota and Bowling Green trounced Michigan State. That left the Bulldogs facing the Bowling Green Falcons for the championship March 24. Defenseman Tom Kurvers, who had just received the Hobey Baker Award, top scorer Bill Watson, and centers Matt Christensen and Tom Herzig played a phenomenal game, with a tied score after the third period. That night UMD played in the longest NCAA men’s hockey championship game ever played. The Bulldogs went four overtimes before losing with a score of 5-4. “It was a pretty quiet ride home," Sherri says, "but it was a season we will never forget.”

Sherri started college life living in Griggs Hall and then the Oakland Apartments. In her senior year, she lived in Capehart Housing on Arrowhead Road. She was captain of an intramural team called the Hooter Hunters and played broomball, floor hockey, and softball, competing against teams with names like the Outlaws and Amazon River Rats. 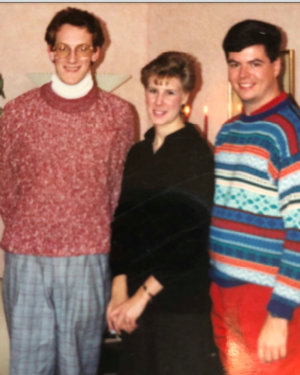 “A lot of my friends came from the Iron Range,” she says. “Rudy Perpich was the governor and there was a lot of pride in being from Northeastern Minnesota.” Sherri shared that pride. She had many relatives in Two Harbors. One weekend she traveled to Hibbing and learned how to make potica (a rich, thinly rolled sweet bread dough) with her friend Lisa Diehl and Lisa’s mom. “We had to roll the dough out to stretch it," Sherri laughs. "We stretched the dough all over the kitchen.”

In the fall of 1981 Sherri arrived at UMD, fresh from graduation from Fridley High School. At freshman orientation, she sat next to William Ellis, a classmate who became her lifelong friend, and told him about her plan. “I wanted to major in office administration and become a high school teacher who taught business courses.” William and Sherri became good friends and William enrolled in the business and office administration program, too. “We've been friends ever since,” Sherri says.

Sherri learned a lot from her professors, especially Tom Duff and Pat Merrier. Sherri appreciated Mildred Zoller, an instructor in the office administration. "She was a mother hen to us. 'Millie' invited us to her house in Lakeside for dinner, and she brought treats to work.” Sherri says her teachers were the best people. "So much of what they taught me, I still use today.”

The course was heavy in computer management and leadership. “We learned to look at the whole situation and decide what to do. By learning the tools for financial management and asset management, I blossomed.”

The class was taught to assess the culture to come up with strategies to bring the project to fruition. “Above all, we were taught that people were the number one concern,” Sherri says. “That lesson has taken me far.”

“Right now, the world is facing the COVID-19 pandemic,” she says. The lessons from her program at UMD are coming full circle for her. “The most important thing is how we take care of each other… How we stay engaged... How we come through these very tough times as a team.”

During the summers, Sherri landed an internship with Medtronic, a global medical device company. “I developed a unique skill set in the Office Administration curriculum that was technical and included a great deal of focused communication training.” Sherri was very organized, and she had “excellent grammar skills, which helped a lot.”

After leaving UMD, her first job was at Health One, a not-for-profit group of hospitals, clinics, and other care centers from 1985 to 1991. She also earned a Master's degree from Metropolitan State University. Her next position was with Metropolitan Rehabilitation Services, a private forensic psychology practice, from 1991 to 2013, and during that time, she was back at school again, this time for a M.A. in Higher Education Administration from the University of Minnesota.

Now Sherri is an administrative director with the University of Minnesota School of Medicine in the Department of Surgery. “I am so thankful I get to work with such incredible people,” she says. She works closely with Dr. Sayeed Ikramuddin, head of the Department of Surgery, and former department head, Dr. David Rothenberger, who provides leadership as the senior advisor for Physician Well Being within the Medical School.

“I am blessed to work with our team of surgeon scientists, researchers, educators, and dedicated staff," she says. "Although we’re isolated, we don’t walk alone. It is empowering to empathize with others."

About the Labovitz School of Business and Economics