Discovery in a New World 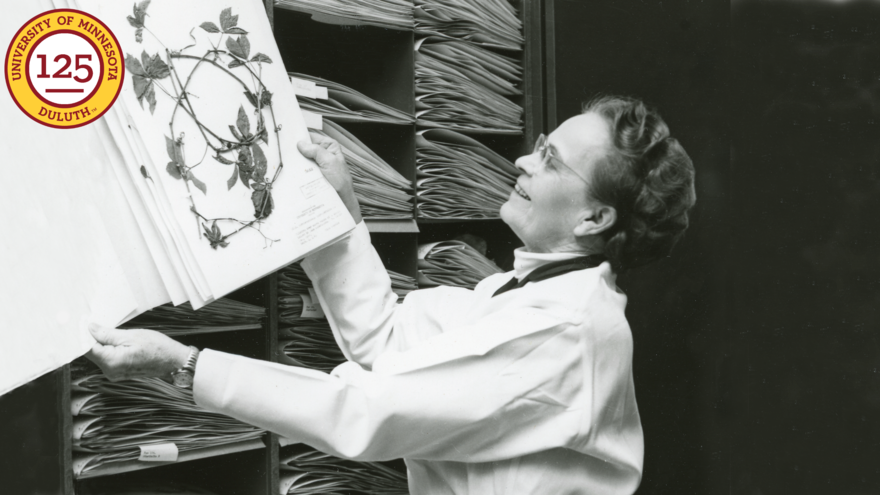 From Finland to the U.S., a student becomes a teacher.

When Olga Lakela gave the Cap and Gown Day address to UMD graduating seniors in 1958, she told them about the fields and meadows and the “purple heather and bluebell” near her childhood home in Kestila, Finland. 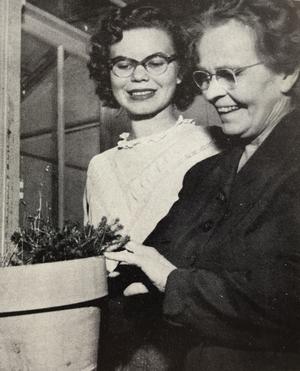 Ardis Peterson (l) was the assistant in the botany department in 1953.

She spoke about her trip through Ellis Island with her parents on New Year’s Day, 1906. It must have been a tremendous adventure, but it was only one of the journeys she embarked on before she came to UMD as professor of biology in 1935.

Lakela left her second home in Biwabik, Minnesota, on her next journey in 1908. She traveled by train to Valparaiso, Indiana, where she invested all her savings in a comprehensive course in the English language and a two-year primary teaching program. Her first day in class she walked into a room filled with her Valparaiso classmates, all men.

Minot, North Dakota, came next. Again she traveled alone, this time to fulfill her two-year commitment, from 1910 to 1912, to teach in a primary school.

A Friend in Duluth

Her next stop was back in Minnesota. She met with E.W. Bohannon, president of the Duluth Normal School, in his office in Old Main. Bohannon became a friend who would guide her through five years of teaching in St Louis County and her own tuition-free higher education at Duluth Normal.

He must have seen the special spark in Lakela, because he stayed in touch with her as she earned degree after degree at the University of Minnesota. Her Bachelor of Science degree came in 1921 and her M.S. degree in 1924. She taught and became the biology department head at Minot North Dakota State Teachers College but was back at University of Minnesota in 1930. A national Scientific Research Honor Society prize was bestowed in 1931 and finally the Ph.D. in Botany and Zoology came in 1932. Her thesis was on the Genus Heuchera L. and that work played a major role in her later life’s research.

Each day before class, from the earliest spring day until late fall, Lakela would rise at 5 a.m. She searched the hillside for plants to bring to class. On one of these excursions in 1938, she found something remarkable, a broadleaf grass. The plant, Poa Chaixii, was known in Europe and Asia but its discovery in North America is still credited to Lakela.

She never stopped preserving the items she collected. During her years in Duluth, Olga discovered two plants: Tiarella Cordiflora var. typica, a large-growing plant in Eastern woods of America, and Tiarella Cordiflora var. austrina, a heartleaf foamflower. She wrote about the rare Rubus chamaemorus, the Arctic cloudberry, and rediscovered Caltha natans, the floating marsh marigold, which hadn’t been sighted since the early 1900s.

Lakela gathered specimens by traveling to Lake, Cook, Aitkin, Itasca, Carlton, and Koochiching counties of Minnesota as well as points on the Canadian side of the border lakes. She hunted deep in the woods and fields of St. Louis County and gathered more than 400 species on Duluth’s Park Point alone. 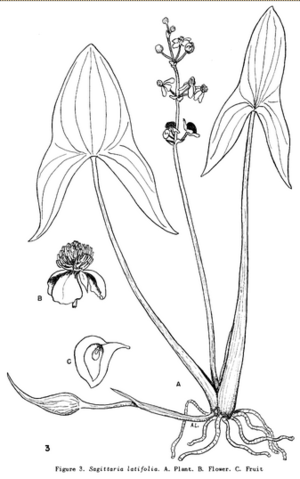 A illustration drawn by Allen Landgren of Broadleaf Arrowhead (Sagiteria Latifolia) from the book, "A Flora of Northeastern Minnesota" by Olga Lakela

These plants, she pressed and preserved, along with nearly 20,000 other plants and ferns, to build a substantial herbarium. Some of the specimens date as far back as 1846, with the majority of the collection from the 1940s. When she left UMD, the collection numbered 31,000 and today, in 2020, it contains more than 50,000 dried botanical specimens.

In the summer of 1939, Lakela left the shores of North America once again. UMD Professor Emeritus David Schimpf, one of the past directors of what is now called the Olga Lakela Herbarium, said she traveled to her birthplace in Kestila, Finland, and collected plants. "We have plant specimens in the Herbarium with the notation, 'Former Lakela Estate, 1939.' She must have traveled to the Arctic Ocean because she brought several plants from there as well." Schimpf calculates that Lakela traveled back to the States on an ocean liner right about the time Hitler was entering Poland at the start of WWII.

A Gift to Future Generations

As Lakela saw her UMD compulsory retirement in 1958 looming, she expanded her efforts toward the publication of a book, A Flora of Northeastern Minnesota. She praised UMD Provost Raymond W. Darland for "his very great interest in the progress of this book and for his unsparing effort in securing means for its publication." Darland and many Duluthians made a valiant effort to raise the funds for the publication of the book in the 1950s, printing a brochure and garnering media coverage, but the funds fell short.

On December 28, 1965, more than seven years after she left UMD, Lakela’s monumental reference book was printed by the University of Minnesota Press. It is still in print today. Described as a complete identification manual, it provides keys, descriptions, and distribution data for the ferns, fern allies, flowering plants, trees, shrubs, and herbs of the lake and forest country. Many of the 1,300 species it chronicles were previously unreported in Minnesota. It is illustrated with 110 drawings and 419 maps. The plants in it were found in a 9,000 square miles region, which includes the Superior National Forest and three continental river systems, a crossroad of plant migration.

Lakela held high honors at UMD. At the 1940 New York World's Fair, she was named among 650 foreign-born Americans honored on the "Wall of Fame" for distinguished achievement in her field. She was also listed in "Who's Who In America." In addition to her botanical work, she was an accomplished ornithologist. She taught, researched, lectured, and published on the topic.

After her retirement from UMD, Lakela continued her research at the University of South Florida in Tampa and helped to create a tropical Florida herbarium. Her discoveries there included a mint plant, Dicerandra immaculata, or Lakela’s Mint. She continued to publish, right up until 1976, only four years before her death in 1980.

Olga left a permanent mark on UMD with the publication of her 1965 book and the establishment of the Olga Lakela Herbarium, which has continued to grow. She established a research fund to support the herbarium and the Biology Department as well. But perhaps the greatest legacy of all is the inspiration she gave to her colleagues, her students, and the community. She was an unrivaled role model, a generous and supportive leader, and a first class researcher.

About the UMD Biology Department