Tucked away on Twenty-third Avenue East and East Fifth Street in Duluth stands three, red sandstone arches. They loom over the surrounding neighborhood with a story that some have forgotten. These arches belonged to the original UMD building, commonly called "Old Main." Before it belonged to the University system, it was Duluth's Normal School and later the Duluth State Teachers College. The building was designed by the architectural firm of Emmet Palmer, Lucien Hall, and William Hunt. Construction of the building started in 1898 and was abruptly halted by a fire in 1901 which gutted all progress. This wasn't going to stop Duluth from building their own Normal School, as they were desperately in need of one. The building was rebuilt and completed within the same year.

Above: The science classroom on the top floor of Old Main. Note the arched glass window at the upper right.

Finally, the Duluth Normal School opened in September of 1902. The school had ten faculty and just over a hundred students. As attendance grew, so did the need for more buildings and dormitories. The two neighboring dormitories, Washburn (1906) and Torrance Hall (1907), were designed by Clarence H. Johnston, who is best known for the architectural designs of the famous Glensheen Mansion. 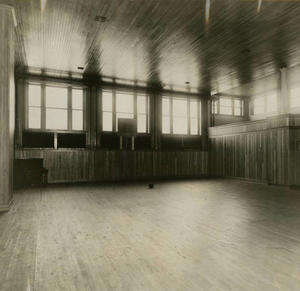 In 1988, a UMD undergraduate research project titled An Historic Portrait of Old Main was written by Paul Edgbert Anderson who graduated in 1989. There is some doubt that Anderson was able to enter the building, as UMD vacated it in 1985. Anderson examined the historical and architectural integrity of Old Main. He described in depth the style used in designing this renowned building: a Beaux Arts interpretation of  Renaissance Revival architecture. This style was "characterized by absolute symmetry, the uses of classical orders, and the concept of unity and the relation between the whole and its parts." Photos in the UMD Archives show simple decorative borders and Victorian-style light fixtures in nearly every room.

"Fortunately," Anderson wrote, "Duluth's 'Old Main' has withstood the times by escaping fire and demolition. The building gives the UMD campus historic identity and aesthetic integrity. With the acceptance of the complex into the National Register of Historic Places, it is obvious that the complex is historically significant."

Anderson spoke too soon. On February 23, 1993, the building burned to the ground.

The loss of Old Main was a shock to many UMD alumni. 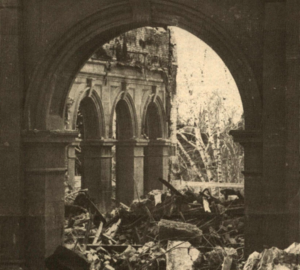 This photo of rubble around the arches appeared in the "Statesman" a few days after the fire.

Ken Moran, a 1951 alumnus who served as the UMD campus photographer for decades, remembers the morning after the fire. "It was a little traumatic for me," he said. "That morning I heard on the news that there was a fire at Old Main. I thought I'd drive by with my camera and maybe I would see a blackened window someplace.” Instead Moran saw a smoldering ruin.

Later that year, Moran investigated some activity at the Laboratory School, which still stands next to the remaining Old Main arches. The Laboratory School's high chimney had been scorched by the Old Main fire and it had to be taken down. Moran was expecting to see equipment erected on the site for pulling the tall chimney over. "I didn't see any equipment," he said. "Instead there were two men on scaffolding, taking the chimney apart, brick by brick."

"I'm glad they created a park on the Old Main grounds because people are still able to visit it," Moran said. "It's part of the memories of the people who went through school there."

Moran echos the words of countless alumni and community members, "It was a beautiful building."

The photos in this story are from the Archives and Special Collections, Kathryn A. Martin Library, University of Minnesota Duluth. An Historic Portrait of Old Main by Paul Edgbert Anderson is courtesy of Duluth Public Library.