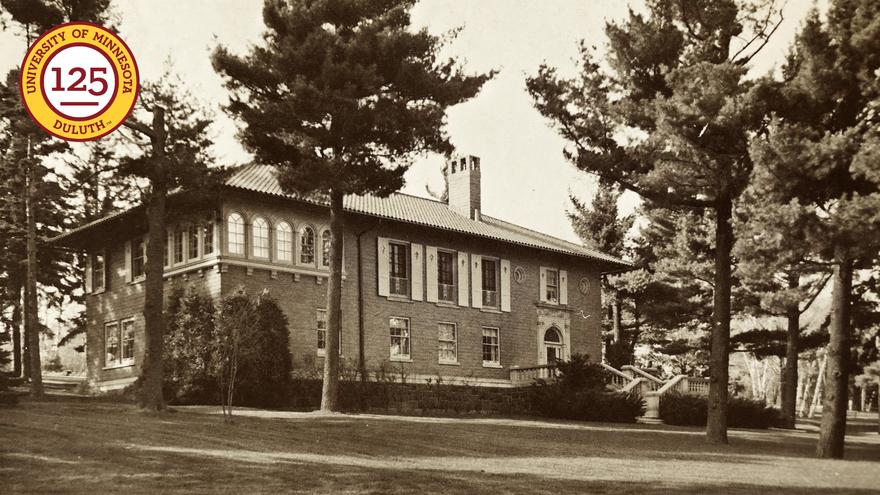 The Tweed family imparts their love of fine art to future generations.

George P. Tweed met the train at the Union Depot on Michigan Street in Duluth. The staff were waiting. They escorted Tweed to a cargo car where Tweed proceeded to open packages. The shipments came from New York City, Chicago, or Detroit, and the goods were transferred to a train in St. Paul to make the trip north. Tweed examined the contents of each package and sorted them into two piles: keep and return. A work of art was inside each package.

George Tweed received the painting, "The Diggers" by Jean-Francois Millet, from railroad builder James J. Hill in a trade.

Tweed had a system. He received catalogues of art auctions and galleries via the postal service, and he employed two art buyers to make purchases for him, on approval. When the trains arrived, he made his final choices, and returned the rest.

One can see the selections Tweed made today in UMD’s Tweed Museum of Art.

Tweed, born to Norwegian immigrants in rural Minnesota, made his fortune in the development of mines on Minnesota’s Iron Range.

Inside the Tweed Gallery

He held onto the fortune as a banker and financier. All through the 1930s, between the world wars, European art was often sold to U.S. collectors and Tweed was among them.

Tweed’s taste was called “unconventional,” because he didn’t follow popular trends. He purchased pieces from around the world and decades later, art appraisers discovered many pieces of “important work by significant artists” in the collection.

George made the purchases, but it was his wife, Alice, who hung the art in their home at 2309 East First Street in Duluth. That home, built by James Cotton in 1908, was an Italianate mansion, decorated with hand-carved stone, exotic woods, centuries-old Italian marbles, mosaics, and stained glass.

In 1941, the Tweeds moved. They donated the James Cotton Mansion to the Duluth State Teachers College (which became UMD in 1948). There, in the building now dubbed Tweed Hall, student art classes and art exhibitions were held.

The outside entry to the Tweed Gallery

The carriage house was named the Tweed Annex and for a time, housed the ROTC offices.

The Tweeds' new home at 2631 East Seventh Street was well suited for an art gallery. Alice once again took over the decorating and the placement of the art. In one of the photographs UMD has of the Tweed Gallery, the Jean-Francois Millet’s painting, “The Diggers” takes a prominent spot above the fireplace. That painting was a trade with the railroad builder James J. Hill, and is arguably the most valuable piece in the collection.

The family, Alice, George, and their daughter Bernice, lived on the second and attic floors. Visitors were invited to visit the art collection in the home one day a week. George Tweed died in 1946. The couple had amassed a collection of 300 paintings by the time Alice Tweed donated the house and the collection to UMD in 1950.

On September 20, 1950, the Tweed Memorial Art Collection was formally opened with Alice Tweed, University of Minnesota President James Lewis Morrill, and other dignitaries in attendance. It remained in operation as a gallery until 1958 and already in 1955, the gallery had displayed more than 50 major exhibits to nearly 26,000 community groups, public school children, and college students.

A New Museum of Art

UMD needed a modern facility. Alice, now Alice Tweed Tuohy after her marriage in 1953, was ready to help. She and her daughter each made a substantial donation to the Tweed Museum of Art building fund, and in 1958 they were both in attendance at the dedication ceremonies.

The George P. Tweed Memorial Art Collection lives on. It's comprised of predominantly 19th century European and American art, including examples of the French Barbizon School and American Impressionist landscape paintings. Over the years, the Alice Tweed Tuohy Foundation has made significant contributions to the Tweed Museum of Art’s renovation efforts and its acquisition funds.

Through the years, several important pieces of real estate were given to UMD.

Looking at Olcott Hall from the entryway of Tweed Hall

Darling Observatory: In 1944, longtime astronomer John Darling bequeathed his observatory at 910 West Third to the DSTC. It was used by the community and the campus for star gazing.

Nortondale Tract: In 1949, Regent Richard L. Griggs headed the citizen and civic group effort to purchase 160 acres of the Nortondale Tract to be used for UMD’s new campus.

The Alworth Estate: In 1951, the estate of Royal D. and Mollie Alworth at 2627 E. Seventh Street was donated to UMD. Covering a full city block, it contained two large brick residences, a two-story brick garage and other buildings. The greenhouse was used by the UMD biology department.

Glensheen, the Historic Congdon Estate: In 1968, the estate of Chester and Clara Congdon at 3300 London Road, was given to UMD, which operates Glensheen as a historic house museum to this day.In 1979, the mansion opened to the public.

Information from this story came from the Archives and Special Collections, Kathryn A. Martin Library, University of Minnesota Duluth. Above: A photo of the Tweed house taken in 1974.