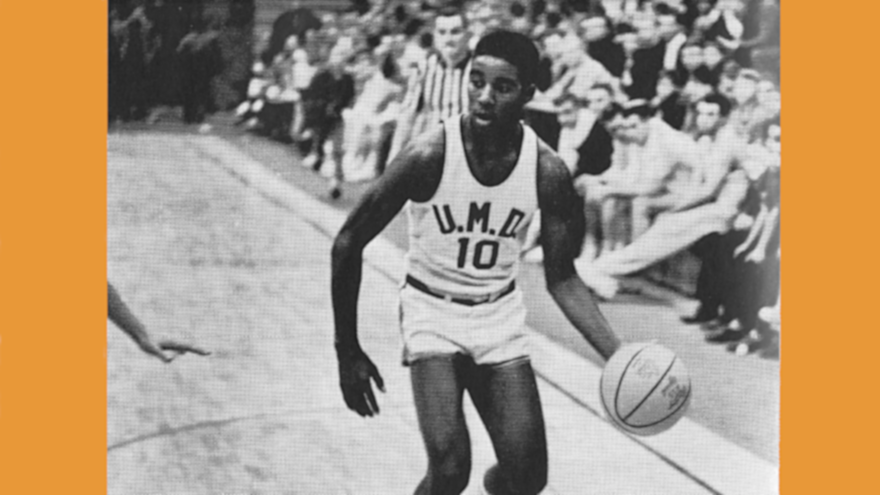 It was 1963. The buzzer went off at the end of an eventful basketball game in the Physical Education Building gym. Harry Oden, a senior, was captain and UMD’s Most Valuable Player. He was on the All-Conference first team and the University of Minnesota system's first black basketball captain. He gazed into the stands.

He took a long look at a sea of faces. “They were all faces that didn't look like me,” he says. Oden, with more baskets already in that season than any other player, won the game for the Bulldogs. To his right, his teammates crowded together.

"In my four years at UMD, I was never invited to go out and celebrate," he says. "I never knew a cheerleader's name, and was never congratulated after a game by any one of the cheerleaders." That night, he went back to his dorm to study.

During those years, Oden felt alone for more reasons than the exclusion of his classmates and teammates. “I was in Duluth for three weeks before I saw another black face,” he says. Duluth was much different from his hometown in Milwaukee, where he was surrounded by a black community. In Duluth and other places, while traveling for games, he was refused service at the movies, restaurants, and hotels. Oden went long years dealing with the racism and hatred that came with being a black man in the 1960’s. Because of the basketball schedule, he spent years of Thanksgivings, Christmases, New Year’s Eves, and Easters, alone. Only once did one of his teammates offer to bring Harry to his home.

One day in his sophomore year, Oden packed up to leave Duluth for good. He even made it downtown to the bus station with his suitcase before he turned back. Getting a college education was too important to him, and there were people who cared. “Norm Olson, the basketball coach, supported me.” Oden also mentions Lloyd Peterson, the athletic director, and Jim Malosky, the football coach, who encouraged him. "But the main reason I turned around was because of something I told my father before he passed away," Oden says. "I promised my father that I would go as far as I could in school."

As Oden attended UMD, national civil rights struggles loomed. North Carolina saw violent protests over “whites only” lunch counters. The University of Alabama blocked black students from registering. At the March on Washington for Jobs and Freedom, Martin Luther King gave his “I Have A Dream” speech.

The summer after his Oden’s senior year, he was visiting his grandparents in Alabama when a bomb at Birmingham’s 16th Street Baptist Church killed four young black girls. Oden traveled to Birmingham that same Sunday. "I wanted to see if I could help in some way." It’s no wonder Oden calls these years, “Some of the toughest years of my life.” 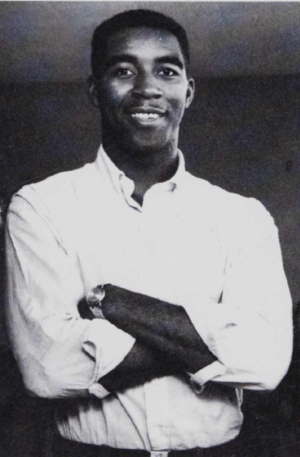 Civil rights had become personal. Earlier in Oden's senior year, no Duluth school would give him an opportunity to do his student teaching. It was a low spot in Oden’s career. Lloyd Peterson, the athletic director, and Coach Norm Olson came to the rescue. They found Oden a position at Morgan Park High School. He student taught under Graydon Stromme, a history teacher, Morgan Park's basketball coach, a basketball player, and an avid UMD basketball fan.

Oden's professors were also a refuge. “I had some great instructors,” Oden says. “They treated me fairly." Oden received support from teachers in his major. "History prof Arthur Larsen was my best and favorite instructor and Dr. James McClear, another history prof, taught me so much.”

With this support from faculty and staff, Oden went on to graduate from UMD with an undergraduate degree in education in 1964 and master’s in history and education administration in 1980.

Oden’s effort to bring basketball players to UMD started early. When he was just a junior, he started driving high school basketball players up to Duluth from Milwaukee to check out UMD. That pride in UMD and confidence in the UMD faculty and staff never wavered.

After he received his degree in education administration, his career in the Milwaukee Public Schools began. It lasted for 35 years. As a high school teacher at first, and later as a high school principal, he dedicated his life to community service.

He continued with the road trips to Duluth. He piled students into his car and drove them to UMD to show students what the campus had to offer. He often paid for hotels, meals, and other student expenses.

When Oden's car became too small, he worked with other Milwaukee educators to bring students from all over the area by the busload on recruitment trips to UMD. So deep was his commitment, on occasion, he actually paid the shortfall in an incoming UMD student's tuition.

Foxworth finished a Run For Excellence, an 154-mile run from St. Paul to Duluth. Foxworth started at the St. Paul Capitol and ended at Duluth’s City Hall. That’s where Foxworth brought Harry Oden to the stage and announced that the $56,000 raised would become the Harry Oden Scholarship for Minority Students and Students with Disabilities. The next year, in 1995, Harry ran part of the way with Foxworth for a second run and that effort raised an additional $56,000. Oden's teammates from his first year at UMD, Tom Stone and Dave Baker, contributed money toward the scholarship and helped raise funds from others. Foxworth honored Oden for his “tireless humanitarian acts” and his “devotion to his community.”

Harry Oden Scholarship funds grow every year, and every year, except for 2020 due to the pandemic, Oden returns to Duluth to present the students with their awards.

In 2020, still happily retired in Milwaukee with his wife, Willa, Oden tells about the students he encouraged to go to college.

UMD wasn’t the only recipient of Oden’s dedication. “I’ve helped over 1,000 students of color, as well as white students, get into college, not just at UMD but into colleges and universities around the country,” he says.

“I’m not going to get rich from it,” he continues. “I get rich because I’ve touched so many lives, not just as students, but adults too. I’ve been blessed in a lot of ways.”

Oden’s commitment to helping students is a testament to the vow he made to his late father. Oden pledged he would always treat people the way he wanted to be treated, and he would always be willing to give something back. Remembering his father’s words, Oden says, “After my last basketball year, I promised that I would never let a person of color go through what I went through at the university.”

Oden also quotes Mark Twain, “The two most important days in your life are the day that you were born and the day that you found out why.” Oden says, “People ask me when did I find out that important day in my life." Oden remembers two moments. "I think I found out what I was supposed to be doing was the first day I had a basketball in my hands in high school, and again on the day I got off the bus to attend the University of Minnesota Duluth. It was a combination of both.”