The Library Responds to the 1960s 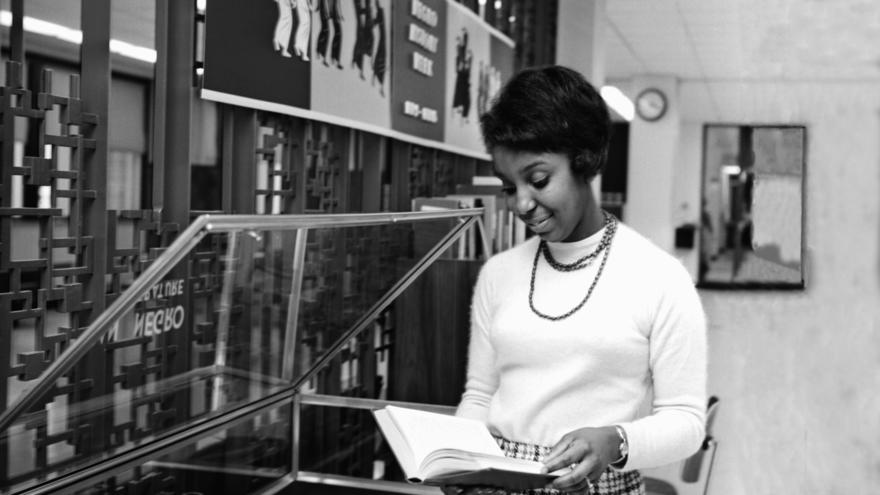 Creating a space for diversity and inclusiveness.

In 1967 and 1968, UMD students were conscious of a shift in American politics. The editorial pages and news pages of The Statesman covered the civil rights movement and the struggle for social justice. 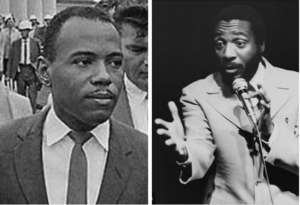 James Meredith and Dick Gregory spoke at UMD in the late 1960s.

Many UMD events and activities included topics about diversity and injustice. In April 1967, James Meredith, the first African American to attend the University of Mississippi, spoke at UMD on "Racial Peace in America." After Martin Luther King, Jr. was assassinated in April 1968, UMD students raised money for the

Changes at UMD became more permanent when, in April 1969, UMD opened a Black cultural center for students, staff, and faculty at UMD. Called the George Bonga Room, in honor of a Negro-Indian voyageur in Minnesota during the 1800s, it was located in the UMD Library. (The building is now named Kirby Plaza). The library housed the George Bonga Collection, which contained books, magazines and newspapers on African and African American topics; and it featured a framed portrait of Dr. King.

The Duluth community got involved. Mrs. Marjorie J. Wilkins, president of the Duluth Chapter of the National Association for the Advancement of Colored People (NAACP), presented UMD with a check for $100 to buy additional materials for the center.

UMD Librarian Rudolph Johnson said, "We are indebted to the NAACP and many students and citizens who have made it possible for us to make these purchases which greatly enhance our… library.”

Carrie (Maupins) Lindahl ‘69 and her sister, Sylvia (Maupins) Herndon ’71, recognized the importance of creating a gathering place for Black students.

Their father, William Maupins, was a respected UMD staff member and president of the Duluth NAACP from 1958–1969. He also approved.

Lindahl remembered the George Bonga Room and regrets only having a few short months before graduation to use it. “We were pleased the administration and the library recognized the importance of a welcoming place for students.”

Herndon says, “It was an enjoyable space. It was so comfortable; Black students gathered for discussions, and speakers met with students there, over coffee and cookies, after events.”

Two notable speakers arrived at UMD soon after the George Bonga Room opened. They were Julian Bond and Rufus Mayfield.

Rufus Mayfield gave a presentation in the Kirby Ballroom in November 1969.

A civil rights leader, Bond was a member of the Georgia House of Representatives and co-founder of the Student Nonviolent Coordinating Committee or SNCC. He spoke on politics and race in September 1969.

Mayfield appeared on the Kirby Ballroom stage in November 1969. He caught the nation’s attention when he worked for justice in the case of a tragic shooting in Washington, D.C. A police officer shot Mayfield’s friend in the back after an altercation over a 29-cent package of cookies. The friend died. 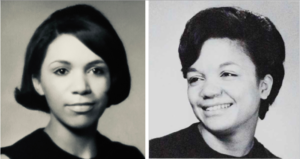 Mayfield continued his work for justice. He joined another civil rights champion, Marion Barry, to establish Destiny-Pride, a school and work program for 1,400 Black youth in Washington D.C.

Herndon worked as a student worker in the scholarship and loans office and graduated with a degree in speech in 1971. She came back to UMD as an employee and one of her tasks in 1976 was to author a document for UMD entitled, “Recruiting and Retaining Black Students at UMD: A Handbook.” It outlined strategies for creating a welcoming campus and called for the hiring of a full-time Black recruitment officer.

Diana (Coleman) Kelly married UMD football great Glen Kelly '71. She earned an undergraduate degree from the University of Michigan-Flint and a masters degree from Eastern Michigan University. She and her husband are happily retired.

Banner Photo (above): Diana (Coleman) Kelly reviews one of the books in the George Bonga Collection.