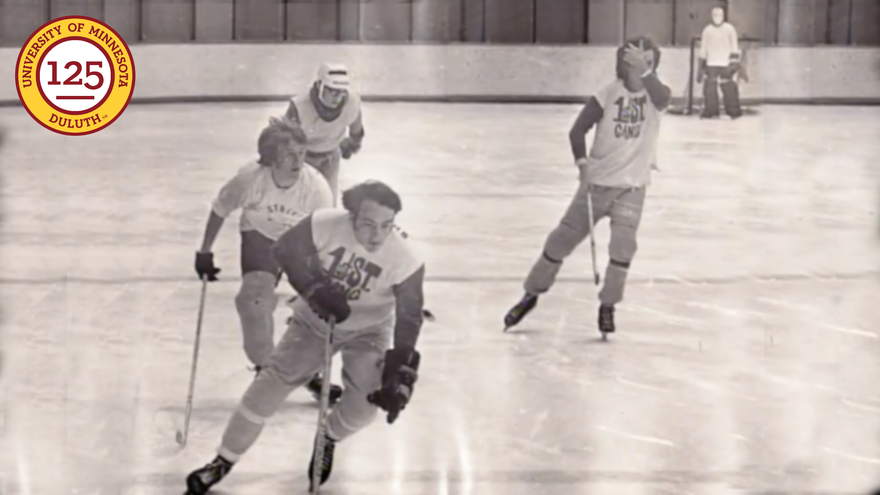 On Monday, May 4, 1970,  the 1st Street Gang had an intramural softball game scheduled for 5pm. As students finished their classes, the 1st Street Gang gathered on “The Ledge.” That’s the granite window ledge that looks out on Lake Superior, a perfect place to sit and watch students pass through the Kirby Student Center. 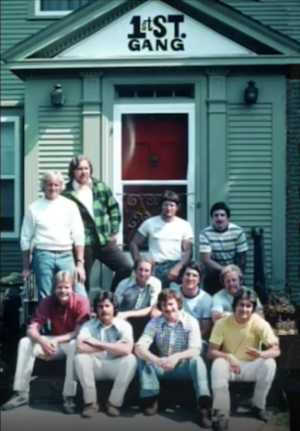 1st Streeters, wearing their signature white jerseys, which was traditional game day attire, arrived as they finished their classes. Among them were two cousins, Tom Larson '73  and Bob Hofstrom '74, 1st Street Gang founding members. “We all made it a point to wear our jerseys to games,” said Hofstrom. “We came out to cheer for our teams, the men’s and the women’s.”

Between classes and intramural games the group often headed up to the Rafters, which was on the third floor of Kirby. The lounge area was popular, complete with chairs and tables, a fireplace, burgers from the short order kitchen, and beer.

As Hofstrom tells it, “The Gang was started as a rap against the frats." In those days, UMD intramural sports were dominated by fraternities. “Before the 1st Street Gang came along, if you wanted to play intramural sports you had to join a fraternity,” Hofstrom said. “We formed our 1st Street teams to challenge this situation.” The “frats” had several teams. The May 3, 1970 Statesman lists intramural teams with names including Gamma, Phi Chi, Alpha Nu, Sigma, and Beta.

Gang recruited student athletes and soon took the lead in the standings for intramural ice hockey, floor hockey, basketball, golf, bowling, softball and broomball. Both the women and men played in several sports. 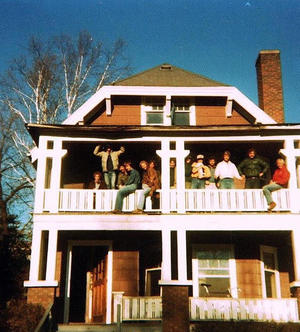 Beginning in the early years, the 1st Streeters stuck together. A group of them, both men and women, lived together in a house up the hill from the Pickwick, 502 East 1st Street. Later, they moved to 1818 E. Third Street and 322 N. 21st Ave. East.

Larson recalls, "We became mavericks, and in an awkward way we became the 'anti-frat' movement. Maybe it was the Vietnam War and the era of protesting that made it seem the right thing to do. We broke the lock on who ran campus life by starting our own group and using our own ways of operating.”

The U.S. was changing and the 1st Street Gang was helping UMD catch up. The fraternities and sororities didn't appeal to everyone, and often came off as too exclusive.

"Bob and I worked together to foster and build an organization that we were proud of," Larson said, “It has a lasting legacy. It was my first taste of discrimination based on gender, and when I look back at how women were held back in many endeavors such as athletics and business--it was strictly gender based. The Gang's inclusion of women changed my view of the world order forever.”

Kristen "Fanny" (Thorberg) Swan '75 agreed, "As a woman coming of age, I was never more respected, cared for, and encouraged than by this band of brothers.”

The 1st Street Gang embraced women as equal partners in their organization, as participants, players, and officers. Men and women supported each other, rooted for each other, fished, camped, hiked, and skied together.

Above left photo: The 1st Street Girls intramural softball team. Kris "Fanny" (Thorberg) Swan is front and center with a jersey. Center photo: Kris (head down) dancing with Kristi (Oren) McDonald at the "Greaser Party." Right photo: Kris at one of the parties doing what she loved…dancing.

They hosted “epic” themed parties at the 1st Street Gang houses, and planned elaborate parties together. The Greaser Party ('50's style), the End-of-the-World Party (dress as something or someone famous), Snark Parties (face painting), and the Pajama Party (pajamas only) stand out. An annual Smelt Fry Bash and the annual 1st Street Banquet were legendary. Long Duluth winters brought cribbage tournaments, euchre tournaments, and rounds of the 500 card game.

The 1st Street Gang continued off and on for over 35 years. Children of some original members of the group have attended UMD and revived the Gang, although it never achieved the size and status it had when it started. 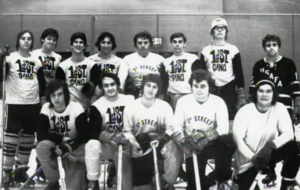 As 1st Streeters left UMD, families and careers took over. Yet, they still kept in touch. Many landed in the Twin Cities and got together for golf, hunting and fishing trips, poker night, and barbecues. They celebrated with organized events and informal gatherings.

The year 2020 marks the 50th Anniversary of the 1st Street Gang. In all of those years, the Gang has never stopped supporting UMD.

In 2002, Geoff Spencer Memorial Scholarship in the Labovitz School of Business and Economics (LSBE) was established to honor 1st Streeter Geoff Spencer's memory. From the initial contributions of $36,000 and though additional contributions from members and investment earnings, the fund has grown to over 130,000. Since its inception they have awarded UMD students nearly $45,000 to business students and in recent years, $5,000 to education students. It is one of the largest scholarships awarded in the LSBE at UMD, at $5,000/year. The education scholarship was created five years ago and continues to award an education student $1,000 each year. In 2009 LSBE dedicated the "First Street Gang" seminar room in their new LSBE building.

"I made 20 of the best friends a guy could have," Larson said. "I will always have their back as they have mine." To Larson, he found more value in what he learn from the Gang that what he leaned in class. "It was the socialization, planning and following through, that became the main posts of my life and career. These were the men and women who I have cherished my entire life and made me who I am today." That sentiment is till echoed today by many of the men and women members of the 1st Street Gang.

SEE MORE About UMD's 125th below

Stories from the Past: The Rare and Remarkable