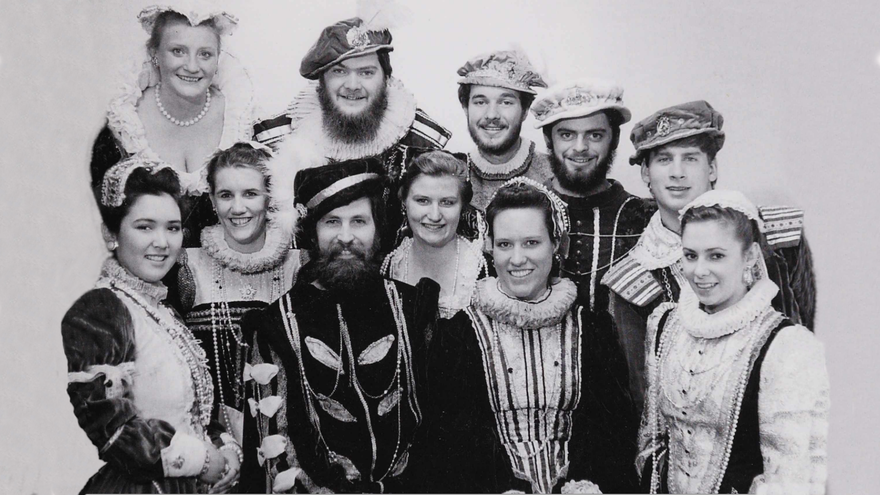 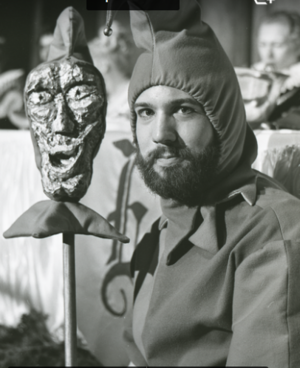 Early on, UMD jumped off the castle tower into the Renaissance world with an annual Elizabethan dinner led by Vernon Opheim, a UMD music professor and the director of choral music.

Jerry Kaldor, who graduated from UMD with B.A. in music in 1976, was one of the performers at the 1975 Elizabethan Dinner. He also joined the cast at other dinners in the '70s and also in the '80s when he came back to graduate school at UMD. Later, he enjoyed a long career as a music teacher in the Hermantown schools and a stint as choir director at the College of St. Scholastica. Kaldor was honored in 2018 as he became a member of the UMD Fine Arts Society of the Prometheans.

From 1974 to 1987 the Duluth community was treated to an Elizabethan Dinner with food, wandering minstrels, a court, and jesters. Kaldor became one of the Madrigal Singers, who performed the vocal chamber music called madrigals, and told a narrative story, similar to dinner theater, throughout the evening. He had fun at every performance. “The Elizabethan dinners profoundly affected me," he says, "I had never heard that kind of music before." 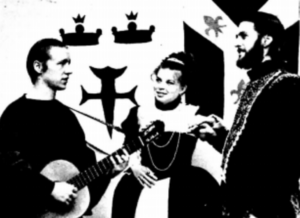 A photo of Tom Barber, Lauri Wilson, and Jerry Kaldor from an April, 1975 Statesman article

"As I learned it, I became immersed in it and I fell in love with the music."

Kaldor enjoyed the music performance and mingling with the crowd, some who were dressed in 16th-Century regalia. "It was such a rush each night as we got dressed in costume," he says. “As singers and actors, we took over the room. It was a great feeling to interact with people having so much fun.”

When it came time for “Ye Order Of Feast,” some guests, who wanted to be authentic, tackled their prime rib with a spoon or even their fingers. The guests were informed that as an eating utensil, the fork was only beginning to be developed during the late 16th century.

For the dinners, UMD took over the Kirby Ballroom and brought the spaces back to the 1500s. That gave community members and students, faculty, and staff, the opportunity to live the way royalty did during the Elizabethan period.

In 1975, Tom Barber, who played the lute, and Lauri Wilson joined Kaldor. The evening included a six course meal for $7.50. Guests started with a cordial cup of wassail and gave a toast of greeting and health. The main course included a salad, Yorkshire pudding, a vegetable, and prime rib of beef. Guests were allowed to use a fork! Dessert was a flaming fruit pudding and the breads included an old English recipe for a whole hearth bread.

Professor Opheim, the director of choral music, took the helm each year, melding dialogue, acting, and song to unfold the stories. 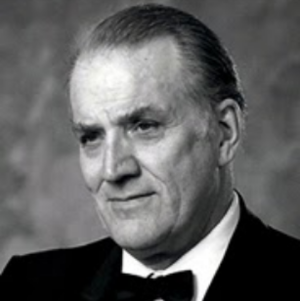 "Dr. Opheim was a big person with a big presence," said Kaldor. "Without him there would not have been an Elizabethan Dinner at UMD. He brought his passion for the music and the pageantry alive in his students. Through all the years of the dinners, he was the constant. With an intense devotion to artistic excellence, he inspired countless students to share the music and the magic with countless attendees."

With the drive Professor Opheim brought to the effort, the event grew in popularity. He took on Cris Levanduski, a member of the University Singers, first as a student volunteer and later as a community volunteer, to help with the production and to develop the scripts. The University Singers, a group of 50-plus members all participated. Every one got involved, from serving the food, creating the set design, making the costumes, handling the lights, and other tasks.

As the years went by, costumes, and entertainment became more elaborate and the meal price went up. The Elizabethan Dinner was held in the spring, and for Duluthians, as well as royalty from the distant past, it was a cause for celebration. "Courts celebrated in great style with a big feast, good company, lots of laughter, and music,"  Opheim remarked in a 1975 Statesman article.

The UMD students thrived as the Duluth community embraced the unique event. "No one had ever experienced anything like it before,” Kaldor says. "Every night was more enjoyable than the next.”

This story was co-written by UMD student Jack Harrington, who is majoring in writing studies and minoring in sociology and LGBT studies. Jack works with Cheryl Reitan in University Marketing and Public Relations.

About the UMD Department of Music