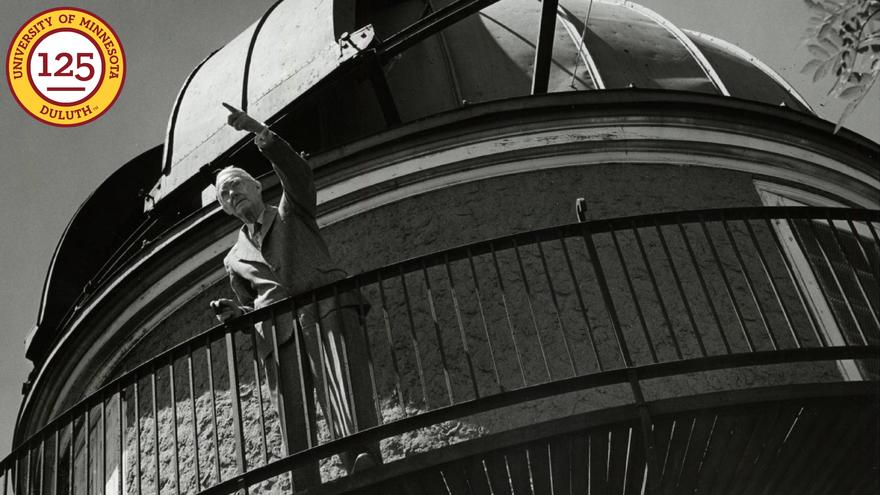 The Darling Observatory started Duluth’s excitement for astronomy. For more than ninety years, Duluth and student interest in the stars has been propelled forward by a collection of telescopes, observatories, and one central planetarium.

John Henry Darling (see photo above) and the Darling Observatory began the story in 1917, but it took until the 1960s for UMD to bring a small telescope and then a large planetarium to campus. 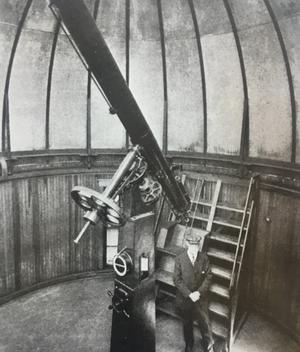 John Henry Darling was born in Michigan in 1847 and moved to Duluth in 1884. He had a remarkable scientific career with the U.S. Army Corps of Engineers for forty years.

In 1903, he discovered magnetic variations over a portion of Lake Superior west of Devil's Island, which endangered navigation by drawing vessels from their courses. The resulting variations were mapped and published with diagrams and details of methods. These navigating aides were used by ship captains.

Darling retired in 1913 but never truly stopped working. He took up the hobby of star gazing which grew into plans for a local observatory. There was no better place to build his observatory than Observation Park in downtown Duluth, named for having "one of the finest views in the city." With permission from the City of Duluth, construction was finished in 1917. At the completion, Darling had spent $11,000 on the observatory, including $3,500 for the telescope alone.

The observatory had a lecture room that seated up to 20 people. Darling opened the observatory to the public six or seven evenings a month to "allow people to view celestial objects and to educate them on astronomy." Darling's observatory contained a nine-inch refracting telescope made by William Gaertner & Co. The company was unable to obtain glass for the lens due to limited supplies during World War I. However John A. Brashear, a Pennsylvania astronomer and instrument builder, had a nine-inch lens on-hand. Darling designed some of the parts for his telescope himself.

After Darling’s death in 1942, the observatory was willed to the City of Duluth with a trust fund of $20,000 to continue its operation. However, events transpired that changed the late Darling’s wishes.

In 1963, Provost Raymond W. Darland discussed with Marshall W. Alworth the possibility of moving the Darling Observatory to campus. Instead they chose to build a planetarium for both the students on campus and the Duluth public.

Mr. Marshall W. Alworth was the son of Marshall H. Alworth, who made a fortune in the mining, lumber, and real-estate industries of northern Minnesota. Marshall W. was a generous benefactor to UMD. He felt that a planetarium could be used day or night, summer or winter, could accommodate many people at a time, and would be an excellent teaching facility. The Marshall W. Alworth planetarium building was completed in 1967. 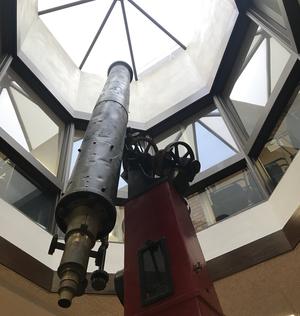 For many years, UMD considered taking over the Darling Observatory, but no purchase was agreed on. Instead of thriving, as Darling hoped, poor management, low public interest, and vandalism to the dome resulted in the building being dismantled in 1972.

The dome ended up in a junkyard, which was once an area of Canal Park. Luckily, the telescope was taken apart and laid to rest in the tunnel beneath UMD.

In 1967, Donald Jackson, the Planetarium Director, worked on purchasing several telescopes for university use. In the 1980s, Eric Norland, a UMD art major, suggested to Jackson that the Darling telescope should be put on exhibit in the planetarium lobby, which at the time was completely open and empty. Liking the idea, Jackson pulled some strings and the telescope found a good home on permanent display, still standing there to this day, with its eye up to the stars. 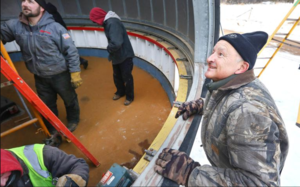 It was the dream that Marshall W. Alworth Hall would also be able to house an astronomical observatory on it's roof and a 16-foot observatory and a 16 inch Cassegrain telescope built by Group 128 installed soon after. The dream did not last long as the dome and telescope were removed in 1985 due to poor performance.

Fortunately, the dome was not discarded. It was given to a supporter of UMD's Physics & Astronomy Department Glenn Langhorst, pictured to the right, who has maintained and used the dome on his private property. Langhorst has recently returned the dome to UMD. Fundraising efforts are underway to give new life to the original dome. The plan is reinstall the dome on the roof of Marshall W. Alworth Hall. It will also house a new 17-inch Planewave telescope.

To discuss a contribution to the UMD Observatory, please contact Carrie Sutherland, senior development officer, at 218-726-6984 or csutherl@d.umn.edu.