Dawn of the Dawg 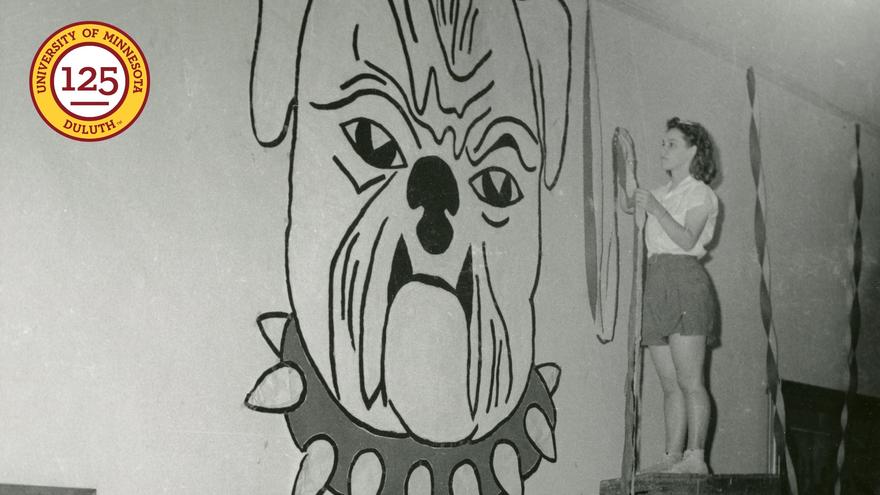 The Legend of the Bulldog: The Bark and the Bite.

The year was 1932. Football players ran down the field in a wave of Green and Gold. Not the Wisconsin Green Bay Packers, but intercollegiate athletes at Duluth State Teachers College (DSTC).

Before the UMD Bulldogs, athletes were known as the Green and Gold, or the Green Wave. They were also informally known as the Peds, short for Pedagogues, which is a word for teacher.

In 1933, the spring football team officially gave their team a new name which first appeared in the Fortnightly Chronicle, the DSTC newsletter, on May 3. They called themselves the Bulldogs. It is said that the team name came from a football player, John “Jack” O’Hehir. According to his teammates, his face resembled a bulldog.

The UMD Bulldog had a “ruff” journey for a while.

Some students in 1956 had the Bulldog on a tight leash. They wanted to change the mascot to another figure that better fitted Minnesota, with names like: Falcons, Norsemen, Voyageurs, and Zeniths. Eventually, in 1957, a majority of students voted to keep the Bulldog name.

Twenty years went by before an unnamed costumed mascot made its first appearance at a basketball game against Concordia College in 1959. A name came easier for a living mascot. Semper Victorious, or Vicky, was UMD's real live bulldog mascot and in 1962 she made her first debut at the UMD-Michigan Tech hockey game.

This photo of the mascot appeared in the 1968 Chronicle.

She proudly sported a maroon and gold sweater as she sauntered (and fell) on the ice rink. She was cared for by the members of Beta Phi Kappa at their fraternity house.

For many years a Bulldog costume was used at sporting events. This Bulldog, a black-eyed, black-nosed, red-lipped mascot was first pictured in the UMD Statesman in October of 1962. The Chronicle yearbook had other photos and the last Chronicle to picture this mascot was in the 1970 edition.

The Bulldog mascot in 1980s

The second Bulldog costume made it's debut in the 1980s. This plush, gray Bulldog known as "Killer" was popular from the mid-1970s to the early-1990s.

By the 1990s, the Department of Intercollegiate Athletics hosted a contest to rename the mascot, as some thought the name was too violent. 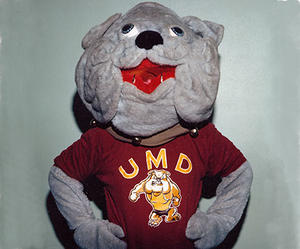 The debate circled the campus. Yale's Bulldog team has a mascot named "Handsome Dan" and Louisiana Tech's "Bulldog" football mascot is Champ, but there is no record of conversations about either school.

The most common memory is that students liked the name, Champ, because it means a champion, a winner of a competition. With several conference and individual national championships under its belt, the student voters in the contest decided that the name, Champ, fit the bill. 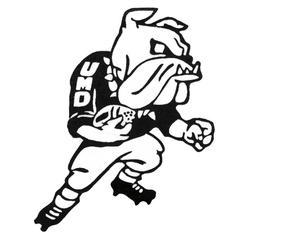 Champ took the win as the new mascot name and it was first announced at a UMD-Wisconsin hockey game on January 24, 1997.

The Bulldog/Champ logo has taken many forms over the years, with the hand-drawn bulldog pictured in the banner photo (above) to dozens used in publications and events spanning decades.

The first official Bulldog logo was introduced during the 1969-1970 school year. The Bulldog was depicted in a series of logos, playing in several sports offered at UMD. 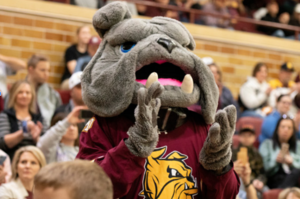 Champ sports the current Bulldog logo on his shirt.

That logo, just slightly modified, is still in use today.

From the Pedagogues in 1932 to the Champ and the Bulldogs in 2020, it's been a colorful and lively athletic history. We can all join the UMD fans and cheer, "Go Dogs."

The information and photographs in this article were researched and collected by UMD Archives student employee Tucker Nelson during the summer of 2019. Jessica Leung did additional research and wrote the story.

This story was written by UMD student Jessica Leung, who is majoring in economics and minoring in political science. Jessica worked with Cheryl Reitan in University Marketing and Public Relations.