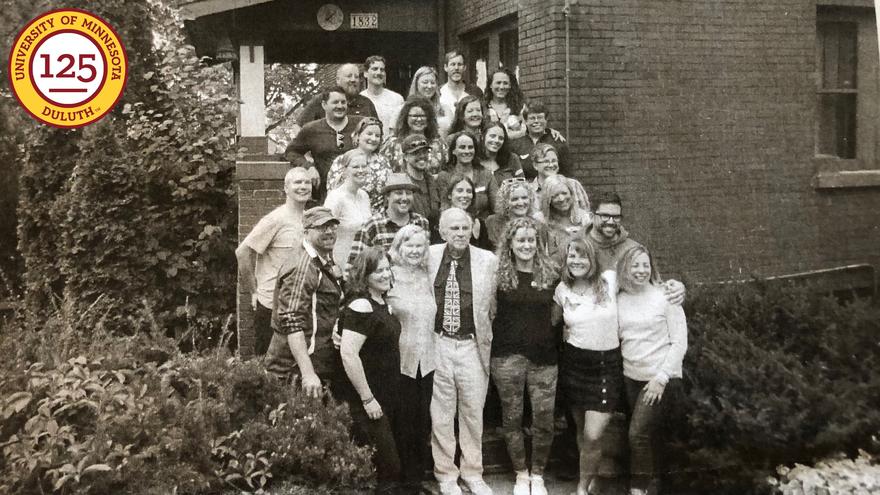 May 4, 2020
by Bailey Jacobson and Cheryl Reitan

Students expand their horizons in the British Isles.

In 1980 the study abroad program to Birmingham, England began at UMD. Tourism to the U.K. began a steep incline that year, just as the first woman Prime Minister Margaret Thatcher took office. The Birmingham rock group, Duran Duran, was high in the world music charts… and going higher. The same year, Hercules, a bear, which had gone missing on a Scottish island during the filming of a Kleenex advertisement, was found!

In the U.S. and at UMD, Anglophiles were paying attention. When invited to sign up for the first UMD collaboration with the University of Birmingham, 50 students registered. This was the first program of its kind in the University of Minnesota system and it blasted off with a strong start.

Bob Evans was the program director for 1981-82, the second year of the program, and along with his wife, Mary, he served as the director two more times, in 1996-97, and 1999-2000. Thanks to Bob, Mary, and the other directors, students have memories of trips to London, historic sites, parties, and lots of group activities. At least 12,000 UMD students and 130 UMD faculty participated in the Birmingham study abroad program. It ran 31 years, 1980-81 to 2010-11, when it moved to the University of Worcester, for a time. 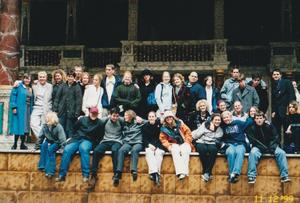 Bob and Mary Evans took students to Shakespeare's open-air Globe Theatre in London. After the guided tour the students got to go on stage.

hrough the entire length of the University of Birmingham partnership, one UMD faculty member would go for the whole year as the director, and others came in for a term as teachers. With Bob’s friendships, British faculty were recruited to expand class offerings for the students. The classes would typically relate to England and field trips with the faculty expanded the students’ knowledge of the U.K.

Wordsworth and the Lake District

During the first weekend in Mary and Bob’s 99-00 year in Birmingham they took the students to the Lake District. The students stayed in a big camping lodge with lots of bedrooms and a big kitchen. “It was right on the lake, and it was beautiful,” Mary says. The students made all of their own meals and invited Mary and Bob to join them.

The group crossed that lake to visit Rydal Mount, one of Wordsworth’s two houses. They enjoyed a guided tour and even saw the bedroom where Wordsworth died. There were giant hills on Lake Rydal, and to the student’s surprise, Mary and Bob kept up on the afternoon hike to the top of one of them. 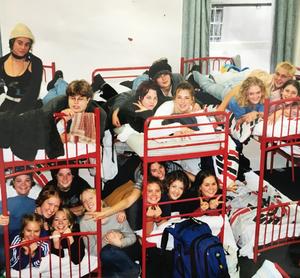 Weekend traveling meant accommodation adventures. Here's one of the bunk rooms in a YMCA.

Bob says, “The weekend was great because the kids got to know each other while boating, hiking, and cooking. It was the perfect opportunity to bond. We were so pleased that we planned the outing for the beginning of the year.”

Not long after classes started, Chancellor Kathryn Martin arrived. She traveled with College of Liberal Arts Dean Linda Krug and Vice Chancellor Vince Magnuson. Marilyn Russell-Bogle, from the library and American Indian Studies, Linda Belote from sociology and anthropology, and Bob who taught philosophy, already had the classes up and running. The visitors were treated to a party. “The students entertained us,” Mary says. The camaraderie among the group was strong, due to the “lovely weekend” in the Lake District. “Some of them sang," Mary says. “There was piano playing and acting. Our visitors were really impressed.” 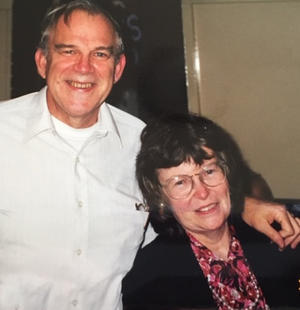 The students wrote: "We would like to dedicate this year to two very special people in our lives... With Bob’s philosophical life lessons and Mary’s loving touch, they became exactly what we needed."

Bob and Mary invited the students to a party every month to honor the students who were having a birthday. Mary tried to make something that would remind the students of home, typically Mexican food, or spaghetti. The students were treated with gifts, cake, ice cream, and games. Bob and Mary designed this to help the students feel more connected to each other and have fun.

Mary and Bob enjoyed the city of Birmingham along with the semester faculty.  Elizabeth “Betsy” Quintero,  from education and Judy Trolander, from women’s studies, came in the spring. The atmosphere was marvelous,” Mary says. “We ate Indian food a lot because it was really, really good and it was inexpensive.” Fish and chips (French fries) was a favorite with the students. “We’d go into these little shops to order and then we’d find a place to sit outside or eat standing up.” Mary and Bob took in the occasional concert at Symphony Hall, and afterwards would often see students going out clubbing. The drinking age in England was 18, which was a big difference from Minnesota’s drinking age of 21.

A Visit to Wales to see a Resurveyed Mountain

The group traveled to Llansilin in Wales to see a land formation that was resurveyed for the designation of “mountain” rather than hill. 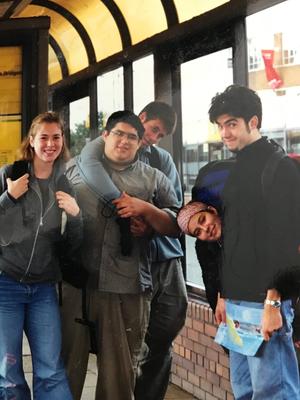 One Monday morning at 5 am Bob’s phone rang. Six students reported in from Cardiff, Wales because they missed the train the night before and would be late for class. The guilty ones were: Abby Wallin Villaran, Jay McBain, Stephanie Novobilsky, Erik Toussaint, Jillian Forte, and Missy Peschman Machkhashvili, who took the photo.

There was a novel and a film made about the adventure entitled, The Englishman Who Went Up a Hill But Came Down a Mountain. Everyone climbed the wrong hill but could see the mountain better that way.

Before the students returned to the states in the spring, the students announced they were hosting a luncheon. Betsy, Judith, and Lynda, who worked in the program office, gathered at Mary and Bob’s flat. First, students arrived with flowers and candy and escorted all off to House 10 where some of the girls lived. "There were four bottles of wine on the table, and different courses were served by the students," Mary says. There was a catch though. For each course they were only allowed one utensil. So everyone was challenged to eat soup with a fork and salad with a knife. The students were all dressed up as waiters and waitresses. Bob says, “The whole event was a ball.” After lunch Bob and Mary were presented with a yearbook which was filled with a dedication and pictures of the students.

The 1999-2000 Birmingham group saw an incredible array of sites, made friends from around the world, and lived in the moment. Their dedication to reunions proves that memories and friendships can last a lifetime.

This story was written by UMD student Bailey Jacobson, who is double-majoring in English and writing studies. Bailey works with Cheryl Reitan in University Marketing and Public Relations.