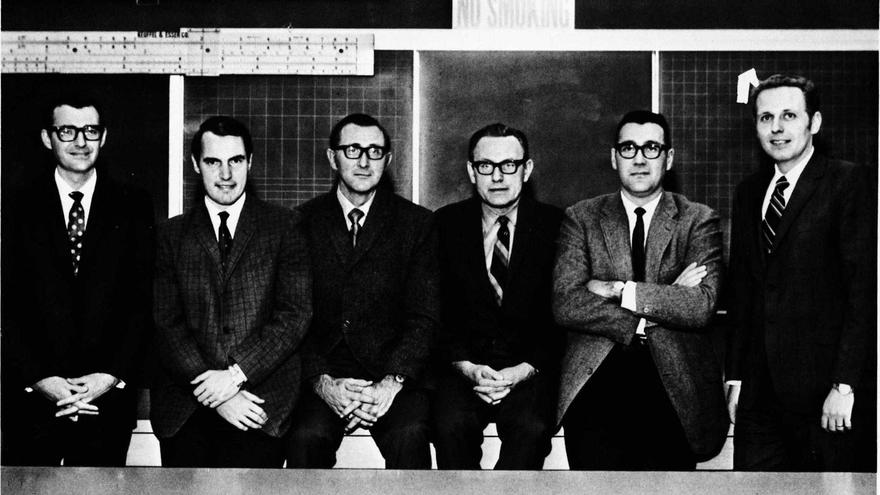 David McMillan and his start at the Bureau of Business and Economic Research.

David McMillan stood on giant piers of steel that stretched out into the St. Louis River and looked over Duluth and Lake Superior. He was on top of the Canadian National Railway (CN) ore docks. A few feet from him were the train tracks and hundreds of feet down below him was the berth where the 1,000-foot ore carriers received their loads. 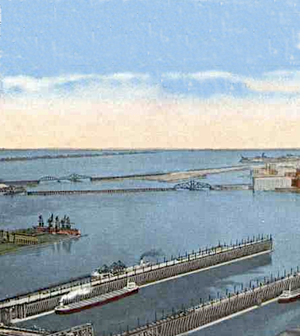 When the CN offered McMillan and the Saint Lawrence Seaway Development Corporation (SLSDC) a tour of the docks, he jumped at the opportunity. “I've driven under the railroad tracks that lead to the docks hundreds, maybe thousands, of times and always wanted to get up there,” he says. From that high vantage point, it seemed that the history of the region played out before him … the mines, the railroads, the docks, the ships…. forestry, wood pulp, and wood product plants…  and all the jobs and people that held it all together.

McMillan, a UMD 1983 alumnus and member of the University of Minnesota Board of Regents, came to UMD from the Twin City suburbs in 1979 to study economics and history. In his senior year, he joined the Bureau of Business and Economic Research (BBER) as a student researcher. The job fit with his interest in economics. He worked with Professors Jerrold Peterson and Richard Lichty, and other members of the Economics department faculty, on an input/output model, measuring regional economic activity, among other projects.

He found the work fascinating.  “It gave me a really good grounding in the area’s resource and service driven regional economy,” says McMillan. They did studies on the indirect and direct output of manufacturing and paper mills. And the models led to actual projects. “The Louisiana Pacific plant outside of Two Harbors, that produces wood trim and siding, came out of that research,” McMillan says. He found delight in the formulas. “X amount of capital investment is likely to create X amount of jobs; I just love that stuff,” he says.

Petersen and Lichty encouraged McMillan to look at a Ph.D. and a career in academia, but there was a stronger field calling, the practice of law.  McMillan applied for several law schools and got into a few.

He anticipated the final word about his start date from his number one choice,  the University of Minnesota, where he was on the wait-list. That’s when things got interesting.

Peterson and Lichty were so impressed with McMillan’s work as a researcher, they offered him a one-year term faculty appointment as research fellow. The law school wait-list uncertainty made McMillan take the job offer seriously. There was one more factor to consider, McMillan had started spending time with Cari Charboneau, his future wife, and she was going to be in Duluth until her graduation the following year. “All the priorities changed,” says McMillan. He accepted the BBER offer.

After law school in Minneapolis, McMillan joined the legal team at Minnesota Power and then began his adventures as an executive of Minnesota Power.  In 2011, he was elected to the University of Minnesota Board of Regents. Over the course of his career he has served the community. McMillan currently serves as chair of the SLSDC Advisory Board and previously served as the board chair of the Minnesota Chamber of Commerce, UMD's Natural Resources Research Institute, the Area Partnership for Economic Expansion, and Goodwill Industrial Vocational Enterprises. He is also a past member of the Duluth Entertainment Convention Center's Board of Directors and the Board of Directors of St. Luke's Hospital.

“If the BBER funding had not occurred back in 1983, I don't know what direction my life would have taken,” McMillan says. “It certainly wouldn't have revolved around resource-based industries and the economic impact they have on northeastern Minnesota.”

He calls it a “full circle.” He and Cari agree, “We’re blessed to call Duluth home.”

Cecil H. Meyers, UMD professor of economics at the University of Minnesota Duluth, and Glen O. Gronseth, a research analyst for the Duluth office of the Minnesota Employment Security Division, began producing a powerful and popular research report – the Duluth Business Index (DBI). 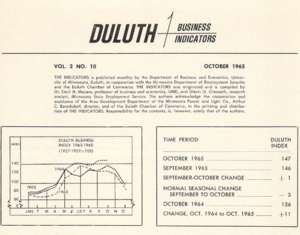 The DBI, first published in 1964, provided an overview of the Duluth economy from the measurement and analysis of fifteen components that included coal, postal receipts, grain, and telephones.

These extensive monthly reports became sought-after tools for businesses and government and were later joined by the monthly publishing of the Duluth Retail Sales Index and the Duluth Hotel-Motel Tax Index.

Recognizing the need for a defined entity to oversee these extensive ongoing research projects, the BBER was officially established in 1970 through the appropriation of special monies in the amount of $10,000. Meyers was the first appointed director (1970–1979), and he also continued with full-time teaching responsibilities.

In October 1974, the Board of Regents approved UMD’s academic reorganization and named the School of Business and Economics, with the BBER and the DBI fitting under that umbrella.

Over time, the BBER gained the reputation as an unbiased and respected research entity, and expanded its offerings to include cost-benefit analyses, input-output modeling, publications, forecasting, and more.

As requests for the BBER’s research and analysis capabilities continued to grow, its structure was changed to employ a full-time director, full-time editor/writer, and a small number of undergraduate research assistants.

The business indexes that started it all continued to be pivotal data and information for the Duluth community and continued to be published until the late-1990s when it became increasingly difficult to gather the needed data.

Many of the BBER’s former student researchers have gone on to have impressive careers, working at companies such as IBM, Boston Scientific, Google, and Cirrus Aircraft. One former student, Chris McIntosh, is now UMD’s economics department head, and David McMillan is a University of Minnesota Regent. 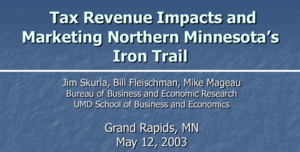 Over the years, the BBER has taken on many large and notable research projects, some of which have had significant impacts on the region. Among them, a cost-benefit analysis of curbside recycling for WLSSD, cost benefit analysis of Reserve Mining, a study on the relocation of the I-35 Corridor, a cost evaluation of the BWCA, and a valuation of the Minnesota Public Library's Return on Investment. More recently the BBER has evaluated the impacts of the trade relationship with Canada, identified and mapped all employment service providers in the region, and evaluated the feasibility of mass timber manufacturing in the state.

In 2020, the BBER provides economic information to the community in a new format, through its involvement in the Regional Economic Indicators Forum, a biannual event that highlights trends in employment, industry performance, business and consumer confidence, and local stock performance.

With her background in applied economics,  Haynes has been increasing the BBER’s scope of services. Some of these initiatives include conducting comprehensive surveys, utilizing additional modeling software, verifying economic impact studies from other entities, and forming partnerships with other University of Minnesota departments to offer additional services like GIS mapping and business retention & expansion.

Today’s BBER isn’t much different than its original iteration. It still seeks to provide research on economic factors affecting Duluth. But it has grown to provide research services for businesses, organizations, industries, government entities, and more for Duluth, the region, the state, and beyond.

Learn more about UMD's Bureau of Business and Economic Research.

This story was co-written by UMD student Jack Harrington, who is majoring in writing studies and minoring in sociology and LGBT studies. Jack works with Cheryl Reitan in University Marketing and Public Relations.