The Outdoors Comes to the Campus

It was late winter of 1972. Susan (Elliott) Lyons ’77 was a junior in high school visiting her brother Scott Elliot ’76 at UMD. They spent a day at Rock Hill doing what Sue loved, skiing! Somewhere along the way, Sue doesn’t know when, a photographer snapped a photo of her (see the banner photo, above). 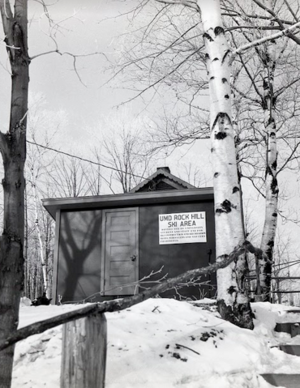 Sledding held its own appeal. Sue has a few confessions to make about her time at UMD, and she is glad that, “The statute of limitations has expired on taking cafeteria trays from the dining hall.” Sue and her friends used them as sleds. ”They were a creamy yellow color, and they worked great.”

At the time Sue was at UMD, Rock Pond had been enlarged to its current size of 1.3 acres. It  was also a popular destination for Sue. One year she took a canoeing class from Eleanor “Ellie” Rynda, the legendary administrator in collegiate athletics and an assistant professor in the health, physical education and recreation department.

“We had to take the class before we could go on a UMD canoe trip to the Boundary Waters,” Sue says. She remembers hearing Professor Rynda standing on the shore. “She called out the canoe strokes, ‘J stroke, C stroke, forward feather stroke,’ barking like a drill sergeant.” It was worth it to get the reward: canoeing and camping in Northern Minnesota with friends.

Sue has to mention the statute of limitations again. “Once we portaged an eight-gallon keg of beer into the Boundary Waters.”

After receiving the 1975 Bulldog Award and graduating Magna Cumme Laude from UMD in 1976, Sue went on to marry her classmate Scott Lyons.

The history of the Bagley Nature Area begins when the University of Minnesota Duluth was established in 1947. Part of the negotiations to transform the Duluth State Teachers College into UMD was an effort by Richard Griggs to give UMD the land for the new university. Griggs corralled a group of Dulutians to purchase the 176 acres of land where UMD stands today. That act sealed the deal for the Minnesota legislature to create UMD.

The Griggs gift inspired the Bagley family to make a gift of their own. In 1953, Dr and Mrs. William R. Bagley and Dr. Elizabeth C. Bagley presented UMD with 17 acres of land as a gift. The property adjoins UMD, across St. Marie Street from the campus buildings.

The Bagley family stipulated the land, first called Rock Hill and University Park, was to be used “to add to the welfare of the student body and also enjoy it’s resources” and it mentioned creating acreage as “a nature center.” William Bagley was respected in Duluth and was well-known for his interest in wildlife conservation.

A biology student at Bagley Pond

The property needed improvements. In 1961 Paul Munson, a biology professor, called on UMD to get rid of the “dumps and wilderness camps” and remove trees which “obstruct the view of Duluth harbor.” Over the years proposals for several uses were made, but UMD refused, opting instead for retaining it’s natural environment and using the land for recreation.

Recreation included a ski hill where, at first, a basic tow rope was built. In 1968, UMD received grant funding and built trails, bridges, and dug a pond to its full 1.3 acre size. They also built a ski tow power house.

Downhill skiing ended in 1975, but cross country ski trails, hiking trails, canoeing, and camping thrived. That year, on March 12, 1975, the name was changed again. It went from Rock Hill and University Park to the WR Bagley Nature Area.

In 2010, an environmental classroom opened near St. Marie Street.

In recent years, Bagley has served another purpose. The college students in the American Indian Science and Engineering Society (AISES) at UMD have been holding a sugar bush in the Bagley Nature Area. They teach other UMD students, and children in the community, about the Native American way of tapping maple trees to make maple syrup. One student in the club, Ron Willis, (shown above) led the sugar bush project at Bagley in 2019.

The land that is now the Bagley Nature Area, was once “covered in white pine,” says Wayne Dupuis ’87, the environmental program manager for the Fond du Lac Band of Lake Superior Chippewa.

He shared insights about the Duluth that existed hundreds of years ago. “Many of the white pine were over 400 years old.” They grew to heights of 150 feet. Bagley pond flowed into the headwaters of Tischer Creek, “where trout climbed uphill from Lake Superior,” he says.

Deer and small animals, like rabbits and fox, are still plentiful in Bagley. Even bear and moose occasionally make an appearance. But centuries years ago, porcupines, mink, marten, fisher, partridge, and many more animals were plentiful.

Bagley Nature Area and UMD reside on what has always been indigenous lands. In 2019, UMD adopted a formal Land Acknowledgement stating that the campus occupies traditional, ancestral and contemporary lands of indigenous people. The university has gratitude and appreciation and honors the Indigenous people who have been living and working on the land from time immemorial.