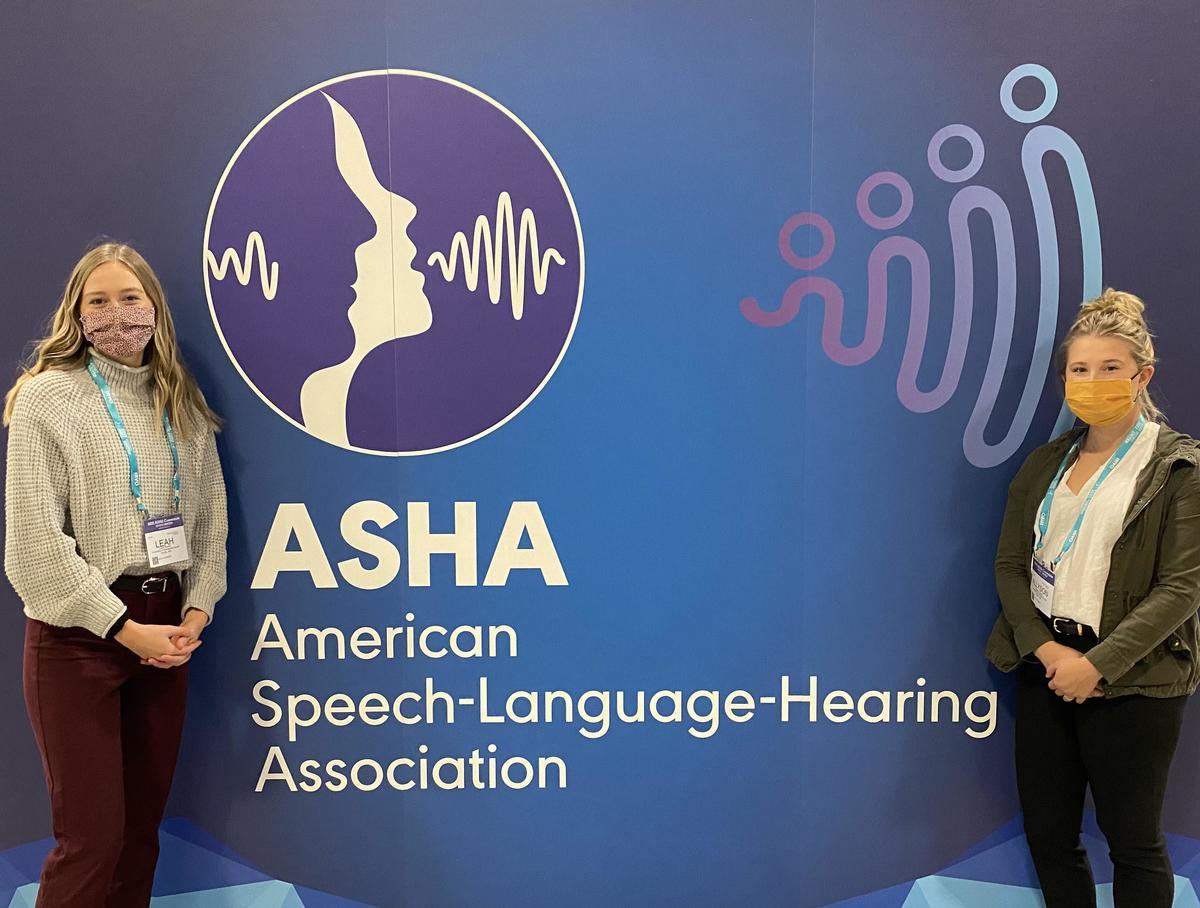 Taking on a research project may seem a daunting task. But for two UMD graduate students, it turned out to be just the right fit for their future professions. Allyson Rogers and Leah Spaeth, two students earning master’s degrees in Communication Sciences and Disorders, are discovering their paths within speech and language pathology through their respective research.

Both Rogers and Spaeth had Professor Mark Mizuko as their clinical supervisor. He brought the pair together with a specific type of technology. Now, the students have taken their research all the way to the annual American Speech-Language-Hearing Association (ASHA) national convention in Washington, D.C.

Spaeth’s research began as an undergraduate student. Mizuko was able to connect her with an eye-tracking tool that allows for the examination of gaze in relation to a person’s surroundings. By using Tobii Pro Glasses to track where a person’s gaze leads, researchers are able to determine exactly where a person is looking during a conversation—the other person’s eyes, lips, or a tree in the background.

Spaeth used the glasses to see where people spent their time focusing during conversations with a person with Down syndrome versus conversing with someone without Down syndrome. In graduate school, Spaeth was able to take her research even further. This time, due to COVID-19, Spaeth used a different Tobii program, known as Sticky, which analyzes eye movements through a personal webcam. Spaeth had participants view videos of people speaking and was again able to track where viewers spent the most time looking.

Rogers chose to focus on augmentative and alternative communication (AAC) devices in her research; specifically, analyzing where conversational partners looked during interactions with someone using AAC. “For example, with an AAC device, or a speech-generating device, you’re looking down at the device to make the message … but instead of just staring at your device the whole time, I teach skills like looking up at the conversational partner as the device is generating the message,” Rogers states. “So one of the big takeaways from my study is looking at social competence, which is teaching them social skills.”

For Rogers, eye gaze can be tracked on both conversational ends—the person using an AAC device, and the conversational partner. She discussed introducing AAC devices more to the general population, helping to create an understanding of what they are and what they are used for. “What I really wanted to look at was how we could improve our interventions for social competence and why that’s important,” she says. “I think that for a lot of people it’s so unfamiliar … I think it's really interesting that we could use a study like mine or like Leah’s to help promote inclusion and diversity in our population.”

Both students are eager to use their research in their future professions as speech and language pathologists. Rogers says it straight to the point: “I feel like I’m here to make a difference in this person’s life, not just in the therapy room.”

The research the students are doing has both clinical and professional implications. “It's awesome that we were given the opportunity to be a part of a topic that has always been around but is becoming more to the forefront of issues … keeping social inclusion in the front of our minds as we actually go into being SLPs,” Spaeth adds on.

Rogers and Spaeth hope to see their research bring more awareness to social inclusion and implicit bias, but also to the work of SLPs. “I think something that is very misunderstood about SLPs is we’re not just there to fix ‘r’ and ‘s’ and help with speech sounds or a lisp,” Rogers says. Spaeth continues on, “There is a need for our profession. We provide therapy across the lifespan, so we treat—from infants to geriatrics and anyone in between. We’ve basically got a medical degree from the chest up.”

This story was written by UMD student Erika Doetkott, who is majoring in Communication Sciences and Disorders. Erika assists Lissa Maki with communications for the College of Education and Human Service Professions.