When Ethan Schurman, a sophomore at UMD, and Samuel Ness, Ethan’s cousin, a sophomore attending Grand Canyon University, signed up to attend a summer convention, LEGO® CON, they had no idea about what was in store for them. 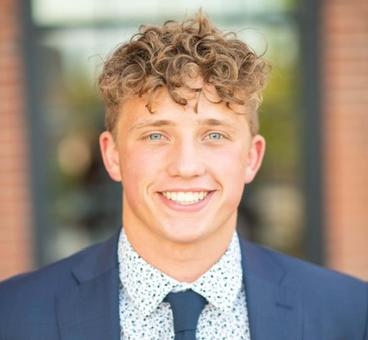 Because they pursued an opportunity they learned about at the event, their artwork went off to a location across the Atlantic Ocean.

The convention was the first-ever LEGO® CON and it was held in June 2021. Schurman and Ness attended several of the session events, which were filmed live from LEGO House in Billund, Denmark. They saw set reveals, listened to Q&As with LEGO designers, and got the inside scoop about LEGO house activities.

Schurman and Ness (see the photo of Samuel Ness on the right) were presented with a unique opportunity during LEGO® CON. They were asked to contribute virtual designs, called LEGO DOTS, to be showcased in the LEGO House. (See Ness and Schurman's designs below.) More than 27,000 LEGO DOTS were created by people from 50 countries.

One of the best parts of the whole adventure is that Schurman will get to visit the LEGO House in May 2022. “I’m going to Sweden this summer as part of the UMD Nordic Art and Design program,” he says. The group will travel to eight cities in Denmark and Sweden. "I’m excited to see our work. It’s part of two murals (see photo below) on display at LEGOLAND.”

Schurman is studying film as part of his studio art B.F.A. program at UMD. He is fascinated with technology and he wants to combine it with his desire to create art. He gets ideas from multiple sources. “It’s always been fun looking at a variety of social media sites, including platforms such as Pinterest.” says Schurman. His creativity clicked in with force when he began exploring narrative digital art, which takes a written story and changes it into a digital narrative. “This is a whole new branch for creative expression.” His excitement about his creations is evident while viewing the platforms he has chosen for his stories.

Both Schuman and Ness are planning for their futures. Ness has plans to continue college and graduate. He wants to find work that provides for a family. He also wants to give back to his community and follow his life values.

Schurman, who will graduate in 2023, is on a film and art path. He is constantly learning new techniques. “I want to reach further and connect to more people with my stories,” he says.

About the Studio Art B.F.A program

This story was written by UMD student Eva Moua, who is majoring in communication. Eva works with Cheryl Reitan in University Marketing and Public Relations.