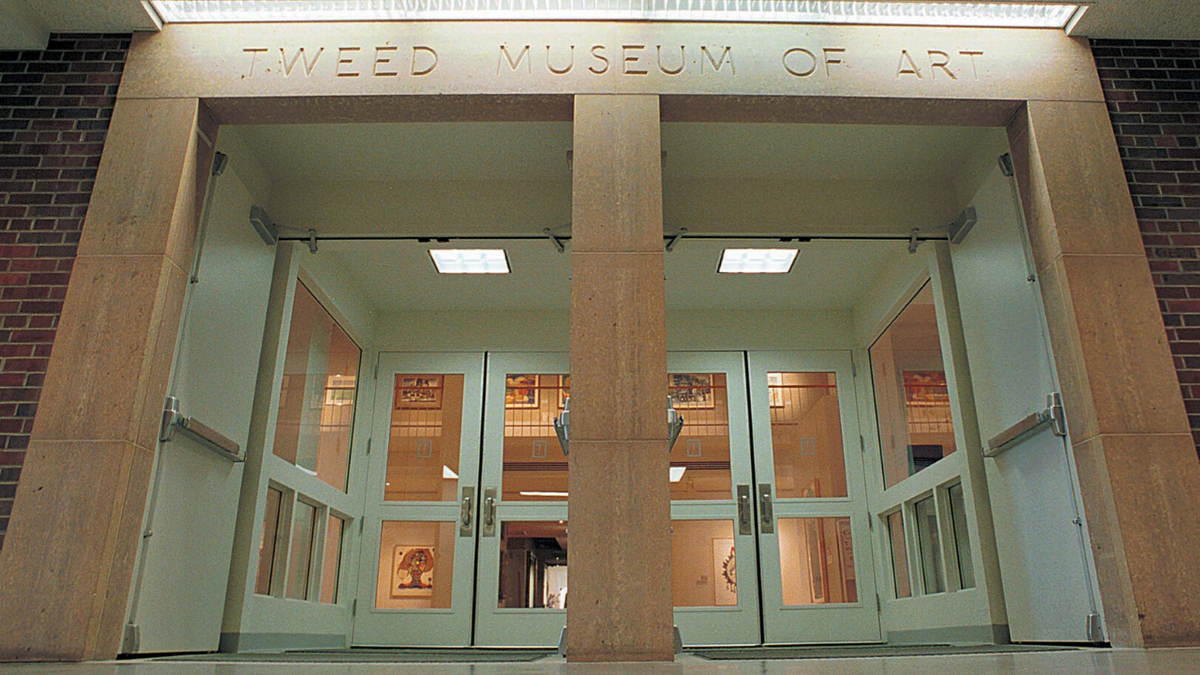 Exhibit at the Tweed Museum of Art ‘a first’ in the U.S.

This is a first of its kind exhibit in the United States. “The Tweed is in a really interesting position to be at the forefront of a new wave of exhibitions on this topic,” says Sara Blaylock, assistant professor of Art History and one of the exhibit's curators.

The exhibition concentrates on one of the Cold War East’s most contentious contexts: East Germany in its final decades. “From photography to performance art, independent films to independent publications, artworks from this period reveal the core disjunctions between state power and citizen agency,” Blaylock explains. “Importantly, artists created a social sphere that was both independent of and entangled within official culture.”

These artists come from a variety of professional and personal backgrounds. They towed the line between state supported experimentation and projects that challenged the well-known cultural strictures held in place in communist East Germany. A core focus is on independent publications, and other forms of printed matter that brought people far and wide together, including Mail Art.

Expertise Exported into an Exhibit

Curators Sara Blaylock and Sarah James, a Gerda Henkel Fellow based in Frankfurt am Main, are leading experts in the study of the art of East Germany, especially the fields of experimental and independent art.

This March, they are both publishing  books focused on experimental art from the German Democratic Republic, and this new research frames the show. “Putting these ideas into conversation with each other and transforming them into the material form of an exhibition has been a brilliant experience,” says James. “We hope the exhibition is research-led but very accessible and speaks to our present as much as the specific past of the former East Germany.”

Curated by Sara Blaylock and Sarah James with support from a “Grant-in-Aid” from the University of Minnesota. Blaylock, author of the book Parallel Public: Experimental Art in Late East Germany (MIT Press, 2022), is Assistant Professor of Art History at UMD. James, author of Paper Revolutions: An Invisible Avant-Garde (MIT Press, 2022) and Common Ground: Germanic Photographic Cultures Across the Iron Curtain (Yale, 2013), is a Gerda Henkel Professorial Fellow.

Note from the exhibit organizers: This exhibition is dedicated to the memory of the Tweed curator Dr. Karissa White Isaacs, whose early and enthusiastic support helped to shape its foundation. Thank you, Karissa.

The Tweed Museum of Art is a collecting art museum that holds in trust a historical and contemporary art collection of over 11,000 artworks on behalf of the University of Minnesota and the people of Duluth and the outlying regions. The museum is located on the campus of the University of Minnesota. Hours and directions can be found at www.d.umn.edu/tma or by calling 218-726-8222.

The exhibition is supported by a Grant-in-Aid from the University of Minnesota.